Background: Ewing’s sarcoma localized to foot is extremely rare. Local control is mandatory because of the aggressive nature of the tumor. Therapeutic options for these local tumors include neoadjuvant chemotherapy followed by surgery.

Description of the case: A 17-year-old female patient presented with a 6-month history of progressive swelling and intermittent pain of the left great toe. Plain radiography and magnetic resonance imaging revealed an expansile mass that had originated from the proximal phalanx of the great toe and was destructing and surrounding the distal phalanx. Her erythrocyte sedimentation rate and serum lactate dehydrogenase levels were slightly elevated. Distant metastasis was not detected. The patient underwent an open biopsy, which confirmed the diagnosis of Ewing’s sarcoma. She was treated with neoadjuvant chemotherapy and disarticulation above the metatarsophalangeal joint. She received adjuvant chemotherapy following the operation. The patient died 50 months after the operation as a result of disseminated disease.

Conclusion: The distal phalanx of the foot is an extremely rare site for the development of Ewing’s sarcoma. As local control is important to avoid dissemination of the disease, neoadjuvant chemotherapy followed by amputation or disarticulation of the affected digit and subsequently adjuvant chemotherapy may be favorable modality for increasing the patient’s duration of survival. Hippokratia 2015, 19 (1): 82-84.

Ewing’s sarcoma (ES) is the second most common primary malignant bone cancer, after osteosarcoma, and is usually diagnosed during the second decade of life1. This aggressive sarcoma is composed of small round blue cells and has a high potential for distant metastasis. Although ES can arise in the soft tissue, it most commonly originates from the bone, especially the appendicular skeleton. The most frequently affected bones are the femur (22%), tibia (11%), and fibula (9%). The short bones of the foot or hand are affected in only 3-5% of cases1.

Primary malignant bone tumors of the foot are extremely rare, and a phalangeal location is considered exceptionally rare2. We report a case of ES located at the proximal phalanx of the foot that was treated surgically with disarticulation at the metatarsophalangeal joint.

A 17-year-old female patient presented with a 6-month history of progressive swelling and intermittent pain of the left great toe. The pain was slightly responsive to analgesics. The patient had an unremarkable medical history, except for a prior history of trauma to the toe, which had occurred immediately beforethe complaints that lead her to seek medical attention. She was referred to our clinic after the detection of a tumoral lesion in her left foot, which had been observed on radiography.

No abnormal findings were observed during physical examination. Routine blood and biochemical analyses only revealed an increased erythrocyte sedimentation rate (ESR): 80 mm/h (reference range: 0-20 mm/h), and an increased serum lactate dehydrogenase (LDH) level: 280 U/L (reference range: 125-220 U/L). Anteroposterior and lateral radiographs of the left foot showed an aggressive lytic lesion with periosteal new bone formation. The lesion was located at the proximal phalanx of the great toe (Figure 1 A, B). Magnetic resonance imaging (MRI) of the left foot revealed an expansile mass that had originated from the proximal phalanx of the great toe, destructing and surrounding the bone (Figure 2 A-D). MRI confirmed that the flexor and extensor tendons were intact. Whole-body bone scintigraphy only demonstrated increased uptake at the left great toe (Figure 1 C). Chest computed tomography (CT) revealed no abnormality. 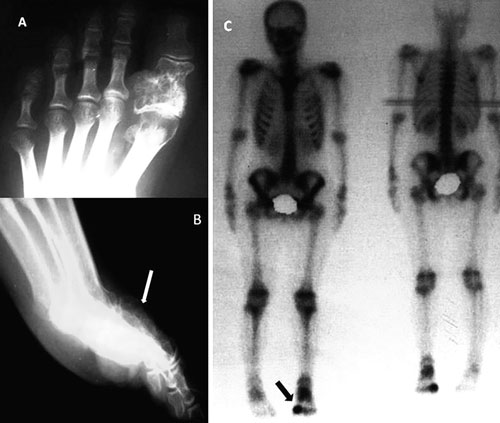 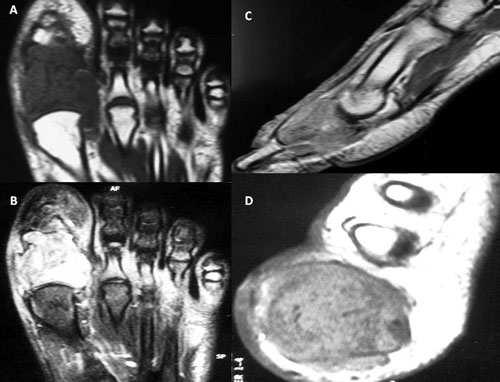 The patient underwent an open biopsy. Histological examination showedsmall, round cells (indicating ES). The tumor cells stained positively for both CD99 and neuron-specific enolase (NSE), findings consistent with ES (Figure 3 A, B). 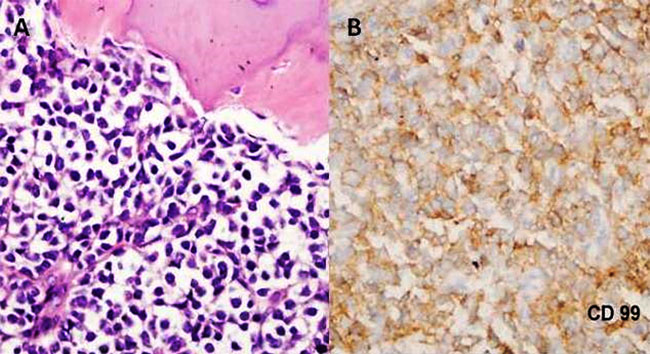 Before surgery, the patient underwent five cycles of neoadjuvant chemotherapy, as per the European Intergroup Cooperative Ewing’s Sarcoma Study (EICESS) protocol. Follow-up examinations, performed after two and five cycles, showed marked reductions in the size of the primary tumor, as assessed using bone scintigraphy and MRI. Her left great toe was amputated above the metatarsophalangeal joint. She was discharged without complications. Postoperative pathological examination revealed negative surgical margins. Histological examination of the tumor revealed good response to chemotherapy; the proportion of viable cells within the tumor was less than 5%. The patient was followed-up according to the EICESS protocol and received 9 cycles of chemotherapy. For the first postoperative year, the patient was followed-up at 3-month intervals. She died 50 months after the operationas a result of disseminated lung metastases.

ES is a primary malignant bone tumor that usually involves the diaphyseal portion of long bones. ES rarely affects the short bones of the hands and feet; only a few cases of solitary lesions that involve these bones have been reported. ES located in the foot is associated with a substantial delay in diagnosis (median delay of 18 months), as compared with ES located elsewhere2.

Primary malignant bone tumors of the foot are extremely rare. The lytic lesions of ES initially manifest symptomatically as pain, swelling, and sometimes fever (especially in metastatic disease)3.Consequently, a large proportion of patients with ES are initially diagnosed with tendinitis or osteomyelitis and are treated accordingly1,4. Therefore, early imaging studies should be prompted by pain without defined trauma that is sufficient to explain the symptoms, pain lasting longer than a month, pain continuing at night, and pain with any other unusual features1. In the reported case, the patient’s history was unremarkable except for a minor suspicious trauma, and her pain was partially responsive to analgesics. Our patient had a 6-month delay between symptom onset and her referral to our hospital. Clinicians should remember that patients with sarcoma might relate the onset of symptoms to minor trauma occurring around the same time4.

Clinicians usually perform clinical imaging when the patient does not improve after receiving antibiotics and/or analgesics. When initial radiological imaging in two planes reveals tumor-related osteolysis and periosteal reactions, a diagnosis of primary malignant tumor is suggested5. However, MRI provides the most precise definition of the local extent of disease as well as the relation of the lesion to adjacent blood vessels and nerves5. Additionally, MRI is widely used to assess responses to neoadjuvant chemotherapy. Indeed, it was used for this purpose in the present case.

Radiologic imaging alone is not sufficient for the diagnosis of ES; the diagnosis should be confirmed histopathologically. Tumor specimens are most optimally obtained through incisional open biopsy performed by an experienced orthopedic oncologist5.There are no specific laboratory tests for ES. However, elevated ESR, moderate anemia, leukocytosis, or elevated levels of LDH may be detected in cases of ES1.

Modern multimodal therapeutic regimens for ES include a combination of chemotherapy, surgery, and radiotherapy1,3,6.Radiotherapy and surgery are the main forms of treatment that are used to achieve local control of ES. Therefore, the choice between treatment modalities for the control of the primary lesion should be made on an individual basis3. Retrospective analyses by several groups have provided the impression that surgery is preferable when local control is possible7. Our patient underwent surgical interventionbecause, as compared with radiotherapy, the efficacy of surgical treatment was expected to be higher and the risk of local side effects was expected to be lower.

The use of surgery for these lesions remains controversial. In such cases, below-knee amputation helps to achieve local control and is recognized as optimal treatment. Many authors have stated that radical surgical treatment is associated with lower recurrence rate and longer duration of survival2,8. Although amputation was the only available surgical method for several decades, limb salvage procedures (such as wide resection and biological reconstruction) are currently performed in most reported cases of ES5. Furthermore, it has been shown that limb salvage procedures can be performed without compromising survival rates7, 9.