Material and Methods: Forty patients with primary NS (mean age 39.6 ± 9.3 years) and 42 healthy subjects (mean age 36.0 ± 7.9) were included in the study. HRR was calculated by subtracting the heart rates in the first, second, and third minutes of the recovery period from the maximum heart rate, reached during the exercise stress test.

Results: The HRR in the first minute was significantly slower in the NS group compared with the control group (25.5 ± 10.1 and 32.4 ± 11.1, respectively; p =0.004). The HRR in the second and third minutes was also slower in the NS group, but the difference was not statistically significant. When a comparative analysis of HRR and the etiology of NS was carried out, no difference was found at any time point.

Conclusions: Impaired first minute HRR was identified in patients with NS. This suggests that primary NS patients should be monitored due to the potential increased risk of cardiovascular disease.

In patients with NS, hypertension and hyperlipidemia develop frequently due to steroid use. In addition, impaired glucose tolerance and the presence of hyperlipidemia with hypercoagulability could increase the risk of developing CAD1-3. As well, premature atherosclerosis, coronary thrombus and acute coronary syndrome can occur without atherosclerotic plaque rupture due to hypercoagulability and an impaired fibrinolytic system4,5. Since many CAD patients are asymptomatic, early diagnosis and the evaluation of modifiable risk factors are important6.

Heart rate recovery (HRR) is the reduction of the heart rate after a period of exercise7. Recovery continues until the heart rate, blood pressure, and electrocardiographic changes all return to baseline values. Heart rate recovery is calculated by subtracting the heart rate at the first, second, and third minutes of recovery from the maximum heart rate during exercise. During exercise, sympathetic activity increases whereas vagal activity decreases. After exercise, the heart rate slows as a consequence of the increased parasympathetic and decreased sympathetic activity8,9. HRR is an indicator of vagal activity, and many studies suggest that slow HRR is an important predictor of death from all causes and cardiovascular mortality10-12. However, HRR in patients with primary NS has not been investigated thoroughly yet. In the present study, we investigated the changes in HRR in patients with primary NS.

Forty patients with NS and 42 healthy subjects were enrolled in the study. Nephrotic syndrome was defined by the presence of proteinuria in excess of 3.5 g/24 hours along with hypoalbuminemia, edema, hyperlipidemia (hypertriglyceridemia and hypercholesterolemia), and lipiduria2. In patients with previously diagnosed NS, presence of proteinuria <0.3 g/d and normal serum albumin concentration was considered remission of disease13.

The NS group comprised patients aged 18-75 years, who had been followed for at least three months after the diagnosis of primary NS. Exclusion criteria were as follows: secondary NS (due to collagen vascular disease, vasculitis, diabetes mellitus, amyloidosis, or drug-induced glomerulonephritis), coronary artery disease, heart valve disorders, rhythm disorders, acute pericarditis, myocarditis, endocarditis, liver disease, malignancy, current smoking and alcohol use, the use of drugs that could affect the autonomous system, a glomerular filtration rate (GFR) of <90 ml/min/1.73m2, and pregnancy. All patients (n=40) were administered 100 mg/day aspirin, and lipid-lowering drugs (if necessary) for at least 2 months before the study. Patients were on a protein (0.6-0.8 g/kg/day) and salt (4-6 g/day sodium) restricted diet throughout the study. The control group was chosen from healthy volunteers with no known drug use and disease, and whose GFR was >90 ml/min/1.73m2 with normal urine protein excretion (<150 mg/day).

The study was conducted in accordance with the Declaration of Helsinki, and the study protocol was approved by the Ankara Numune Education and Research Ethics Committee. All subjects provided written informed consent prior to participating in the study.

All subjects included in the study underwent routine 12-lead electrocardiography (ECG) with ECG analysis before exercise. Exercise stress tests (EST) were then performed according to the Bruce protocol, targeting the maximal heart rate according to age to calculate HRR15. The patients were instructed to fast for at least two hours before assessment, but to take their regular medicines except for angiotensin converting enzyme inhibitors and nitrates, which were stopped for at least 48 hours before the test. At the end of each stage of the EST, heart rate, blood pressure, and ECG findings were recorded. For the target heart rate, the formula [Maximum heart rate (beat/minute) = 220 – age (years)] was used10. To calculate HRR, all patients underwent an EST without a cool-down period (in accordance with the Bruce protocol, in cool-down period patients remain upright and walk at a very slow pace for two minutes after EST16) with the aim of reaching at least 85% of the age-predicted heart rates. Heart rates at the first, second, and third minutes were subtracted from the maximal heart rate, and HRR was calculated at each minute. Heart rate (HR) response during exercise was evaluated by the chronotropic reserve (CR), as follows: [CR = (peak HR – resting HR/220 – age – resting HR) x 100]10.

All statistical analyses were performed using the Statistical Package for the Social Sciences (SPSS) version 17 software (SPSS Inc., Chicago IL, USA). The Kolmogorov-Smirnov test was used to determine the distribution characteristics, and the Levene test was used to assess the homogeneity of variances. Continuous variables are expressed as means ± standard deviation (SD) or medians with interquartile ranges, according to the distribution characteristics. Categorical variables are expressed as numbers and percentages. Continuous variables were compared using Student’s t-test or the Mann-Whitney U-test, as appropriate. Categorical variables were compared by chi-squared test, and were reported as percentages. Student’s t-test was used for comparisons between the primary NS and control groups for the HRR at the first, second and third minutes. p values <0.05 were considered to indicate statistical significance.

The demographic and basal clinical characteristics of the patients and control group are shown in Table 1. No differences in age or gender were found between groups.

No patient was prescribed calcium channel or beta-blockers. Immunosuppressive treatments were as follows: 21 patients (52.5%) did not use any immunosuppressive treatment, seven (17.5%) used steroids, five (12.5%) were treated with cyclosporine, four (10%) used a combination of steroids and cyclosporine, and three (7.5%) steroids and cyclophosphamide. A total of 23 patients (57.5%) were in remission.

When the heart rate recovery of patients and controls was evaluated, the HRR in the first minute was significantly slower in the primary NS group compared with control (25.5 ± 10.1 and 32.4 ± 11.1, respectively; p =0.004) (Figure 1). Although the HRR in the second and third minutes was faster in the control group compared with primary NS, the difference was not statistically significant (p =0.092 and p =0.145, respectively). When the patients were stratified according to presentation of primary NS, no difference in HRR was found between these subgroups. When primary NS patients were divided into two groups based on their remission status, no difference was found in HRR between those who were in remission (n=33, 77.5%), and those who were not (p =0.638). Steroid use was also not correlated with HRR. 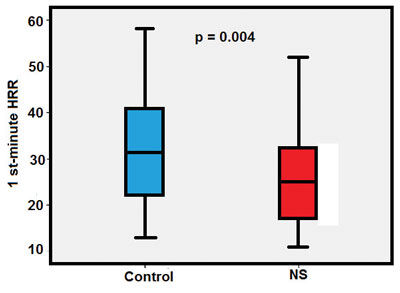 During cardiological evaluation of subjects, no difference was found in ECG-measured ejection fractions between groups. Based on the results of the EST, basal heart rate, metabolic equivalents and chronotropic reserve values were similar in the patient and control groups. All EST findings are shown in Table 2.

HRR was evaluated previously in various patient groups, including chronic kidney disease, heart failure, coronary artery disease, diabetes mellitus, Behçet’s disease, and systemic lupus erythematosus17-20. Although the relationship between slow HRR and cardiovascular mortality remains incompletely understood, it was proposed that a slow HRR increases susceptibility to atherosclerosis. In the Framingham heart study, a slow HRR implied the presence of autonomic dysfunction, which has prognostic significance21. Several studies described a relationship between impaired parasympathetic function and atherosclerosis. For example, impaired parasympathetic activity in response to physiological stress was associated with subclinical calcifications of the aorta and coronary arteries22. A correlation between HRR and GFR was reported, where lower glomerular filtration rates accompanied a slower HRR. It was suggested that this is the result of sympathetic hyperactivity common in chronic renal failure17.

Increased parasympathetic activity decreases heart rate and blood pressure, and is protective in ischemia-associated dysrhythmia23. In a study of 2,428 patients without CAD by Cole et al, a lack of the expected fall in heart rate in the first minute after exercise was an indication of decreased vagal activity, and was a strong predictor of general mortality independent of basal heart rate or changes in heart rate during exercise24.Consistent with this, a study following 5,234 patients without any significant cardiovascular disease for 12 years established that the rate of mortality was significantly higher in patients with slow HRR, independent of exercise, basal heart rate, and other cardiac risk factors10.

In the Lipid Research Clinics Prevalence Study, 2,994 female subjects with no known cardiovascular disease underwent EST. During long-term follow up, it was determined that slow HRR was associated with all-cause and cardiovascular mortality12. Cheng et al, performed a study on male diabetic patients and found that the risk of cardiac mortality was 1.5-2 times higher in patients with the slowest HRR compared to those with the fastest after matching for several variables, including age and basal heart rate25.

In the present study, significant differences in total cholesterol, LDL and HDL levels, and proteinuria were found between NS patients and controls. The presence of dyslipidemia and uremia in patients could have contributed to the impaired HRR. NS patients also had an increased risk of atherosclerotic CAD. Destructive coronary artery narrowing can occur after infections that are associated with immunosuppression and the use of dyslipidemic drugs such as steroids1.

Authors report no conflicts of interest.