Background:Juvenile Recurrent Parotitis (JRP) is a recurrent parotid inflammation of childhood. The aim of our study was to investigate the clinical, laboratory and imaging profile of children with JRP as well as to estimate the impact of siadendoscopy as a therapeutic tool in the clinical outcome of JRP. Methods:Twenty-three children with JRP aged 3.5-16 years, were investigated. Twelve of them underwent sialendoscopy: seven aged <8 years under general and five aged >8 years under local anesthesia. Results:The age at onset ranged from 2-15 years while the number of episodes from 2-8 per year. The autoantibody profile was negative in all patients, suggesting no evidence for autoimmune diseases. Antibody deficiency was found in two children. The imaging studies reveal an overall parotid swelling and intraparotid lymph nodes while microabscesses were present in 31% of the patients. Twelve patients who underwent sialendoscopy had a significant improvement in their clinical outcome; the mean episodes of JRP before sialendoscopy was 3.9/year and reduced to 0.4 at the post-intervention year. Conclusion: Sialendoscopy represents an alternative and promising perspective in the management of JRP. Hippokratia 2015; 19 (4): 356-359.

Juvenile Recurrent Parotitis (JRP) is defined as parotid inflammation in young children of nonobstructive, nonsuppurative nature. It presents as bilateral or unilateral parotid swelling recurring at least twice before puberty with eventual termination in the second decade of life1,2. JRP was referred as the second most common salivary gland disease of childhood, after mumps in the time before the universal vaccination in infancy3.

Clinically the swelling is painful, characterized by local erythema and a systemic or local rise of temperature. The number and the intervals between attacks vary from patient to patient affecting their school activity and social life significantly. The etiopathology of JRP is unclear, although congenital malformation of the parotid glands leading to retrograde infection, allergy, immunodeficiency, autoimmune diseases mainlySjögren’s syndrome or sarcoidosis have been considered4-7.

The diagnosis of parotitis is made on a clinical basis (local swelling, pain, tenderness, warmth, swallowing difficulty, non-palpable jaw angle) and confirmed by imaging modalities8.

Previously, its treatment was conservative during the acute episodes (antibiotics, analgesics, sialogogues, massage of the parotid gland, mouth rinses). Surgical intervention e.g. parotidectomy, duct ligation, has been also suggested9. The concept of sialendoscopy, which is a minimal invasive endoscopic technique, has been recently applied. So far, there is a limited literature on pediatric sialendoscopy, almost exclusively under general anesthesia3,10-13.

Aim of this study is to report a series of JRP children and to evaluate the efficacy of sialendoscopy in the management of JRP.

A 4-year retrospective review of the medical records of all pediatric patients diagnosed with JRP was conducted. Institutional Ethic Committee approval was obtained (Papageorgiou Hospital Ethical Committee, 243/22-12-2015). Thirty-three children (15 boys and 18 girls; 2 to 16 years of age) with parotid swelling, were referred for evaluation. JRP was diagnosed in 23 of the 33 patients. All patients had been immunized by mumps vaccine aspart of Measles, Mumps, and Rubella immunization done in their infancy.

Demographic, clinical and history data were assessed including age, sex, date of first symptoms, localization and number of swelling episodes, need for hospitalization, and ultrasonography findings prior to any intervention.

Thirteen out of the 23 children with JPR were selected to undergo endoscopic sialendoscopy. The inclusion criterion for endoscopic intervention was at least two episodes during the last six months that were not the first two manifestations of the disease. The exclusion criteria for sialendoscopy were mumps, congenital cysts, juvenile Sjögren’s syndrome, lymphoma1.

One child did not undergo sialendoscopy, although he fulfilled the inclusion criterion (eight episodes within the last six months) because his parents did not agree. In total, 12 patients with JRP underwent sialendoscopy. Symptoms and outcome were recorded during the follow-up time after sialendoscopy (every three months for at least one year period).

Sialendoscopy was performed according to the previous description by Konstantinidis et al14. The option of anesthesia depended on age. General anesthesia was preferred for children under eight years old whereas local for the older children. In all cases, an injection of steroids (prednisolone 50-60 mg) in 5 ml of NaCl 0.9% was performed at the end of the procedure.

Demographic and clinical data were assessed and presented in Table 1.

All patients had a history of recurrent episodes that ranged from 2 to 8 episodes per year. The age at onset was variable. Eleven out of the 23 patients exhibited the first episode from 2 to 4 years old. A second peak was from 6.5 to 9 years of age in seven patients, whereas only three patients exhibited the first symptom above 10 years old and the rest two at the age of five years.

None of the patients was positive for autoantibodies and no evidence for autoimmune diseases such as Sjögren syndrome, or Systemic Erythematosus Lupus was established. None of the subjects presented mumps-IgM antibody, suggesting no evidence of epidemic parotitis. Primary immunodeficiency, specifically antibody deficiency was detected in two patients: an 8.5-year-old boy had selective IgA deficiency whereas a 10-year-old girl had IgG4 subclass deficiency. Both patients presented with severe and frequent episodes and had been suggested for sialendoscopy.

Neck and parotid ultrasound were performed in 19 out of the 23 patients (Table 2, Figure 1A).

Figure 1: A) Ultrasonography image showing the parotid gland with low, heterogeneous echogenicity and multiple hypoechogenic areas. B) Sialoendoscopic view of the parotid duct showing the white appearance of the ductal layer with debris.

Twelve out of the 23 JRP children fulfilled the inclusion criteria and underwent sialendoscopy: seven children aged <8 years under general anesthesia with orotracheal intubation and five aged >8 years under local anesthesia. The mean duration of the disease (first onset to sialendoscopy) was 1.72 years. All cases are analytically presented in Table 3. The main endoscopic finding was a whitish appearance of the ductal layer in six patients without the healthy blood vessel coverage (Figure 1B). Range of follow-up of the patients after sialendoscopy was 1 to 4 years (mean ± SD: 2.08 ± 1.2). No complications were encountered.

Sialendoscopy had a therapeutic effect in the majority of the patients: eight had no symptoms during the post-intervention year, and only 4 (33%) experienced recurrent swellings. We had to repeat the endoscopy in two of them who presented severe clinical profile (among them the girl with IgG4 deficiency). Both patients are free of symptoms 1.5 years thereafter. In total 14 sialendoscopies were performed (Table 3). The mean episodes of JRP before sialendoscopy was 3.9/year and reduced to 0.4 at the post-intervention year, showing a significant reduction of recurrence frequency (Figure 2). 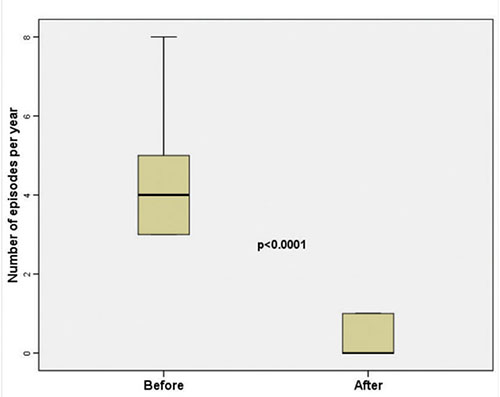 Figure 2: Significant reduction of the mean episodes of juvenile recurrent parotitis in the 12 children after sialendoscopy.

JRP is a self-limiting condition with unknown incidence, occurring at any age during childhood, which usually resolves after puberty but may also persist into adulthood1,2,3,10.

Several studies report a JRP sex distribution favoring males8. We found the same sex distribution ratio (boys/girls: 12/11). Different frequency of recurrences is reported10,14. Our results regarding the frequency of episodes (2-8 episodes per year, median four per year) are in agreement with Miziara et al15.

Age of onset usually lies between 3 and 6 years of age, but earlier and later occurrence has also been observed2,3. We found a range of 2-15 years of age, but we observed two distinct peaks (2-4 and 6.5-9) which are close to those reported by Leerdam et al16.

Concerning localization, we found that 74% of the cases always displayed parotitis on one side whereas 26% presented it in an alternately unilateral fashion. This finding is in accordance with Leerdam et al who reported that 66% of the affected children had unilateral symptoms16.

The pathogenesis of JRP remains unclear. Many factors have been implicated such as dental malocclusion, congenital duct malformation, genetic factors, viral or bacterial infections, allergy, immunological anomalies and autoimmune origin. Infection and anatomic abnormalities are the most common etiologies3.

Although Sjögren’s syndrome is a very rare condition in childhood, primary pediatric Sjögren syndrome should be considered in JRP particularly with bilateral involvement16. We found no evidence for autoimmune diseases such as Sjögren’s syndrome or Systemic Erythematosus Lupus.

The hypothesis of an adequate local immune response in the etiology of JRP is supported by Fazekas et al and Shkalim et al who described patients with JRP and isolated immunoglobulin A deficiency4,17. In agreement with them is our finding revealing primary antibody deficiency in 9% of our JRP patients. Lack of IgA (main mucosal immunoglobulin, abundant into the saliva) leads to the absence of local immunity and may be involved in the pathogenesis of JRP. It is recommended immunoglobulins to be tested in all cases of JRP.

In our study, indication for sialendoscopy was at least two episodes of parotid swelling within the last six months while previous studies demanded two episodes in the last 12 months1,2,10-11,18. Pediatric sialendoscopy presents difficulties, as a consequence of the child’s ductal system anatomy14. Therefore, almost all authors perform the procedure under general anesthesia1-3,10-12,18. Recently, Konstantinidis et al reported sialendoscopy under local anesthesia in children14. To our knowledge, the present study is the second series of children that completed the procedure under local anesthesia, concluding that this technique can be applicable to children aged >8 years.

Our main endoscopic findings were the whitish appearance of the duct and the presence of debris within it, which are in accordance with previous studies1,2,10-11,18. The sialendoscopic lavage with corticosteroids potentially reduced the frequency of recurrences as also reported in the literature11-12,18.It is not clear whether the mechanical dilatation during duct cannulation or the steroid irrigation is the possible mechanism of benefit from sialendoscopy. Recently, Roby et al recommended corticosteroid infusion alone as an effective treatment of JRP19. However, the potential benefits of sialendoscopy as reported by Ramakrishna et al in a recent meta-analysis, suggest that sialendoscopy is efficient and safe for treatment of JRP20.We found that both sialendoscopy and steroid application improves symptoms in JRP.

The limitation of our study is the small sample size of our JRP patients, although the significant improvement in the majority of them is encouraging evidence. Our findings should be confirmed in further prospective studies with larger series and longer follow-up. In conclusion, pediatric sialendoscopy can effectively manage JRP especially with the concurrent infusion of corticosteroids, offering children a better quality of life.