Aim: The aim of this study was to investigate the life expectancy of the Cypriot population between 1986 and 2012.
Material and Methods: We used the data reported in the annual editions of the Statistical Service of Cyprus and constructed life tables of the Cypriot population between 1986 and 2012.
Results: For both genders, and for males and females separately, in the year 1986 life expectancy accounted 74.47, 72.2, and 76.76 years respectively, while in 2012 values increased to about 81.28, 79.02, and 83.50 years respectively. The longitudinal trend of life expectancy is to increase over the calendar years. The largest increase in life expectancy occurred at birth and was approximately seven years for both males and females. Until the age of 55, this gain was approximately six years of life. From age 60 to 65 years, the gain was about five years of life, and in the oldest age groups, the gain was four years of life. The values corresponding to male were lower compared to those corresponding to females, with the exception of the age 0 (at birth).
Conclusions: A significant increase in life expectancy of the Cypriot population was noted in the period 1986-2012, which was more obvious at younger ages and in females. Hippokratia 2016, 20(2): 99-103

One of the key issues in public health is the elongation of life expectancy which, in general, is observed in many countries around the world1. In some countries, in particular, this elongation is significantly high, among which is the Republic of Cyprus2. In this study, an attempt was made to investigate the life expectancy of the Cypriot population between 1986 and 2012.

The data reported in the annual editions of the Statistical Service of Cyprus (both for the demographic data and deaths) were used as primary material for analysis. The Chandrasekar Deming method of statistics3 on births was used until 1998 (the demographic data related the population of the Government controlled area). From the year after (1999), data are based solely on registered events related to births that took place in the particular year and registered until May in the following year.

The statistics on deaths up to the year 2003 were based on estimates made by comparing the civil status registrations with bulletins that were sent by the priests of cemeteries based on the method Chandrasekar Deming. From 2004 onwards, data on deaths and causes of death are based on death certificates, as collected and codified by the Health Monitoring Unit of the Ministry of Health.

The total number of deaths included all deaths that occurred in Cyprus (Cyprus residents and tourists who died in Cyprus) and deaths of citizens of Cyprus which occurred abroad, but their burial took place in Cyprus4.

Tables of the mid-year population by age and sex were used. In some cases, when the mid-year population was not available, then it was calculated as the average population at the end of the year of two successive years. Also, the death tables by age group and sex were used. Primarily, specific mortality rates were calculated by age and sex and afterward life tables were constructed5. The records contained five-year-age groups, with the exception of the first two age groups, namely infants aged 0-1 year and toddlers, aged 1-4 years.

Abridged life tables of the Cypriot population were constructed with data between 1986 and 2012. An attempt of examination of the previous years was made but this data had not been reviewed and were no longer valid; therefore their use could jeopardize the credibility of the study. Life tables were produced for all the years of the study period for both genders together and for each gender separately.

Life expectancy is a life table statistic that indicates the number of years of remaining life for people who have attained a given age (x)6. Life expectancy is presented in this study by age, for both genders, and for either males or females separately. 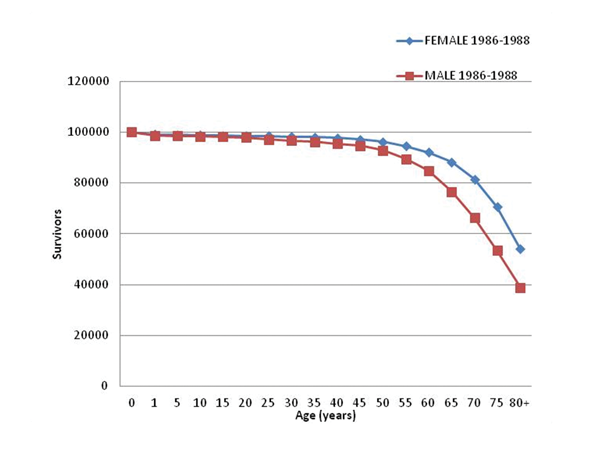 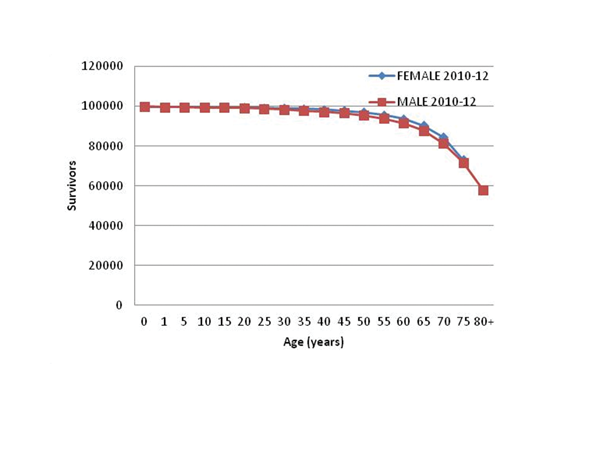 The evolution of life expectancy at the beginning of different ages (0-80+) for the whole population is demonstrated, where nine different curves, representing 3-year time intervals are depicted. Figure 3 depicts that the longitudinal trend of life expectancy is to increase over the calendar years. The largest increase was recorded at birth, and with increasing age groups the gap between the curves was reduced. All the curves of the 3-year period are contained between the curve of 1986-1988 and 2010-2012. In Figure 4 and Figure 5 the difference in life expectancy between age 0 (at birth) and age 80+ is demonstrated more clearly. 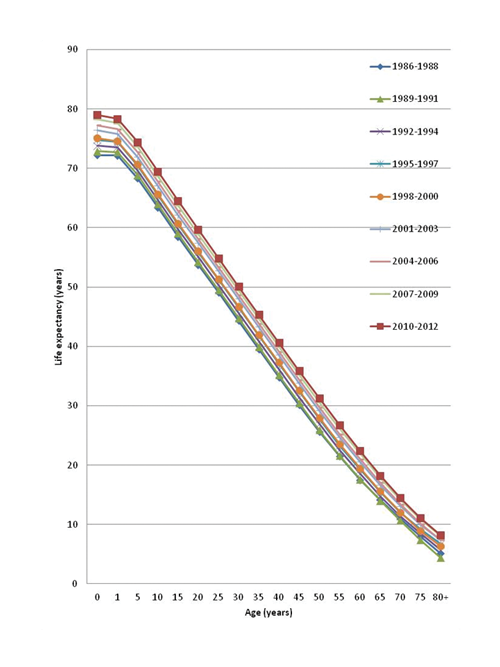 Figure 3: Life expectancy in each age for the examined time interval, divided into 3- year periods. 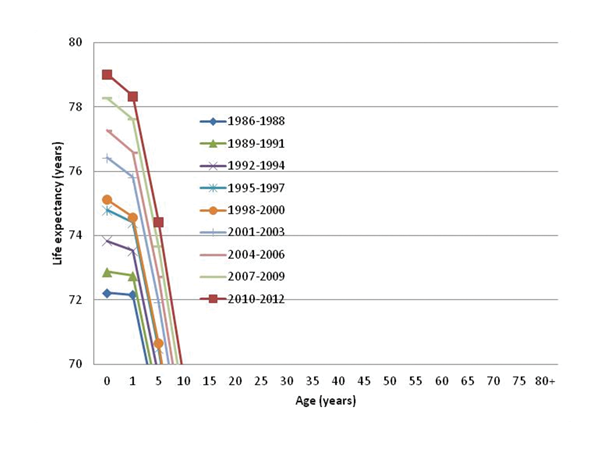 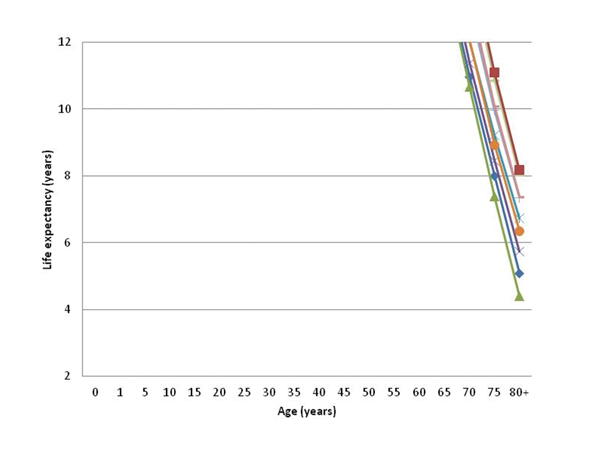 Change in life expectancy between the beginning and end of the examined period at the beginning of different ages, for both genders, is presented in Table 1. The difference in values between the two genders remained relatively stable until the age of 50 years. From the age of 55 and afterward the gap between the genders was increased due to the stronger rate of value reduction for men.

The values corresponding to male are lower compared to those corresponding to females, with the exception of the age 0 (at birth), where males and females are scoring almost the same. The course followed for both genders is constantly decreasing, as age increases so decreases the gain in life expectancy.

Figure 6, Figure 7, and Figure 8 provide the diachronic depiction of life expectancy of the Cypriot population for both genders, and for males and females separately. 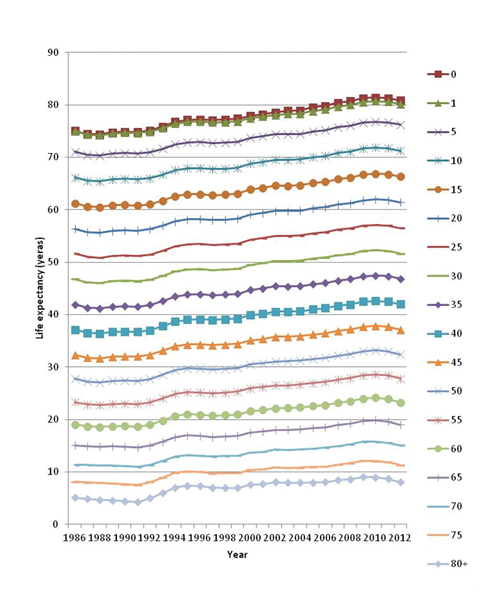 Figure 6: Longitudinal display of life expectancy of the Cypriot population between 1986 and 2012 (both genders) at the beginning of different ages. 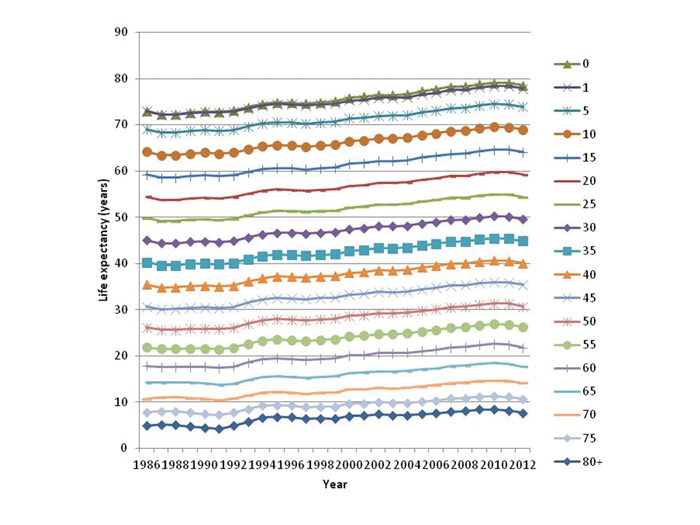 Figure 7: Longitudinal display of life expectancy of the Cypriot population between 1986 and 2012 (males) at the beginning of different ages. 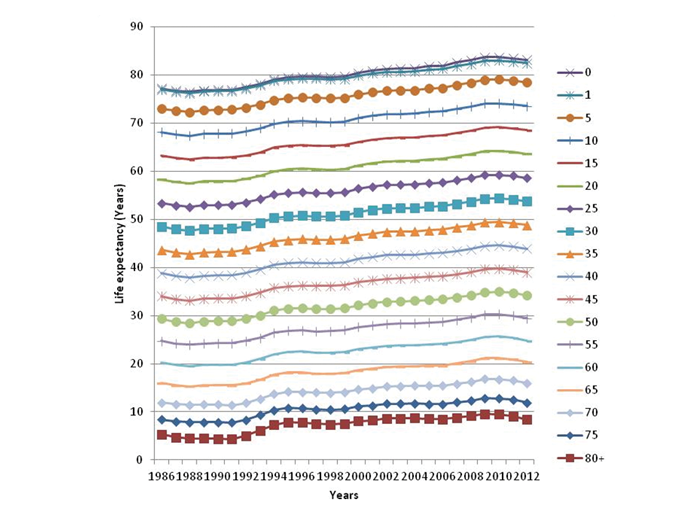 Figure 8: Longitudinal display of life expectancy of the Cypriot population between 1986 and 2012 (females) at the beginning of different ages.

Life expectancy is considered an important factor in clinical decision-making7,8. The expected remaining lifetime allows clinicians and patients to fully explore the long-term prognosis of the patient. Life expectancy at birth is the most important summary indicator of population health. It provides the opportunity to make direct comparisons between populations that are not disturbed by differences in the age structure of the population. It represents an objective method of health assessment that cannot be influenced by personal characteristics, such as sex and ethnicity and can be changed during an individual’s life9,10.

Comparison of life tables over time helps to observe that the curve of survivors is shifted at older age groups due to the simultaneous transfer of mortality in these groups. At the same time, a decrease in infant and child mortality of the Cypriot population from all causes was noted, a trend that is described in all developed countries worldwide11,12.

Life expectancy is in an unbreakable relationship with quality of life. The continuous rise in life expectancy in many parts of the world is due to the improvement of living conditions particularly the change of the lifestyle (i.e. adoption of a more careful diet) and the significant progress in the preventive, diagnostic and therapeutic medicine13.

In line with this, the progressive increase in life expectancy reflects the urbanization of lifestyle of the Cypriot population, the improvement of the quality of entries, the improvement of the diagnostic approach and easier access to health services14. The differences that were noted between males and females reflect possible differences in occupation and exposure to risk factors15.

The age composition of the population of Cyprus changes over the years, with a linear increase in the percentage of the elderly. This is a phenomenon observed in other countries also, in a higher or a lower rate16.

As expected, older people face a higher risk to develop one or more chronic or degenerative diseases, so they use more frequently the health care services, increasing health care costs17-19.Changes observed in the Cypriot society, similar to other developed countries, like an increase in the consumption patterns, the emancipation of women, may lead to the vulnerability of the elderly population20,21.

Therefore, the health systems are forced to change eventually due to the aging of the population. It would be interesting to see, how well they will succeed in it as well as how much a country’s gross domestic product is affected.

A certain limitation in our study is the fact that we could not examine differences in life expectancy between different regions of the Republic of Cyprus, due to lack of records in the statistical service. However, no significant differences are actually expected, due to the relatively small area of the country and the close distances between regions.

For the first time in literature, life tables were constructed, and life expectancy was estimated for the population of Cyprus for the period between 1986 and 2012. Life expectancy of the Cypriot population has increased over the years, for both genders and each sex separately. The largest increase in life expectancy during the examined period was noted at birth and is almost seven years both for males and females. Until the age of 55, the gain is about six years of life falling to four years of life in older age groups. As mentioned, the difference between the two genders remains relatively stable until the age of 50 years, while the difference increases afterward, due to a higher rate of decreasing values for males. The increase in life expectancy at birth is assisted by the reduction of the probability of death at all ages but in particular by the reduction of infant mortality. This increase results in a prominent place for Cyprus in life expectancy in comparison with other neighboring countries22.