Coronary artery dissection is a rare complication of blunt thoracic trauma. It can become rapidly lethal necessitating prompt diagnosis and treatment. The majority of reported in the literature cases of coronary artery injury, including dissection, involve the left anterior descending coronary artery, given its anatomical location in relation to the impact.

A 73-year-old male, without previous history of ischemic heart disease, presented to the emergency department 30 minutes after sustaining blunt thoracic trauma as co-driver in a vehicle involved in a road traffic accident. On admission, he was conscious with a Glasgow coma score of 15 complaining of severe thoracic pain. His airway was patent and lungs were clear to auscultation. On inspection, there was a thoracic contusion consistent with a seatbelt sign. Pulses were palpable in all extremities. There was no evidence of jugular vein distention. He was hemodynamically stable, his blood pressure (BP) was 110/70 mmHg, heart rate (HR) 33 beats per minute (complete atrioventricular block) and respiratory rate 20 breaths per minute.

An electrocardiogram (ECG) (Figure 1) revealed ST elevation (5mm) in leads II,III, aVF,V1-V3 and ST depression (4mm) in leads I and aVL, with complete atrioventricular block. Atropine 0.5 mg intravenous (iv) bolus was administrated immediately and sinus rhythm at 60 beats per minute was achieved. His BP was 110/70mmHg in most measurements. He was under continuous monitoring with automatic BP measurements every minute. His HR was 33-40 beats per minute, and although he presented with complete atrioventricular block the QRS was narrow, the block was transient and it was resolved probably due to the administration of atropine. 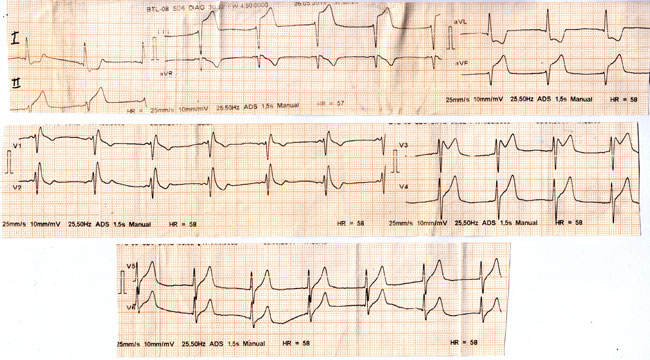 The patient was connected to external pacing system but did not need its support as the sinus rhythm was restored and maintained. Chest and abdominal computed tomography (CT) supplemented the clinical trauma evaluation. Chest CT showed fractured sternum as well as fractures of posterior arches of 4th, 6th and 9th left side ribs (Figure 2). 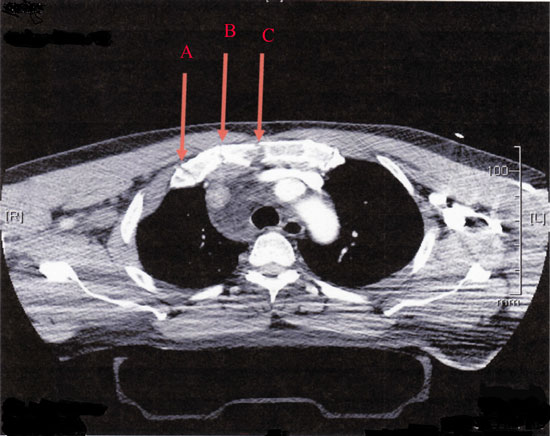 Transthoracic echocardiography showed no pericardial effusion, but the movements on the examination table was restricted due to chest wall injury. His cardiac enzymes were elevated with creatinine phosphokinase (CPK) at 300 IU/L (20-200 IU/L), creatinine phosphokinase-Myocardial Band (CPK-MB) 81 IU/L (< 25 IU/L) and cardiac troponin 1.74ng/dl. He was given aspirin, iv pethidine and was transferred to a tertiary care hospital for urgent (primary) coronary angiography which demonstrated dissection of the right coronary artery (RCA) (Figure 3). Left coronary anatomy was intact, without lesions. Revascularization of RCA was accomplished by placing one drug-eluting stent (DES). The repair was undertaken three hours after the accident, including the time needed for the diagnosis (chest CT thorax) and the transfer to the tertiary hospital. Percutaneous Coronary Intervention (PCI) was fully successful in stabilization of patient’s clinical status. His Ejection Fraction (EF) was 40% before the procedure and increased to 55% after three days, with normal right ventricular function. Patient’s definite medical treatment included b-blockers (metoprolol), dual antiplatelet regimen (aspirin and clopidogrel), statin (simvastatin) and analgesics. The patient remained in hospital for a week. Two and a half months later he died suddenly. 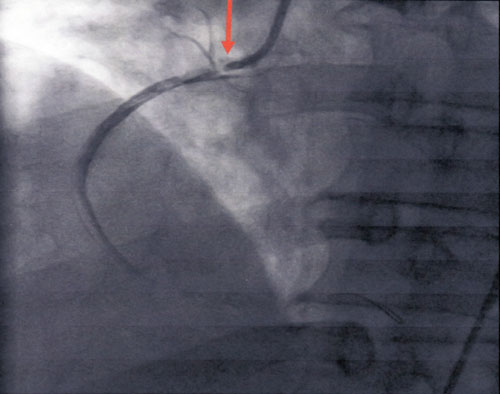 In the reported case there was a high level of suspicion, since his presentation, of a traumatic rupture of coronary vessel, most probably the RCA. History and clinical signs were very clear while the findings of the chest CT confirmed the initial suspicions. As a result the patient was transferred to a tertiary hospital having a catheterization laboratory for immediate coronary angiography, for appropriate interventional management.

The ECG is the most accessible and widely used diagnostic tool for patients with acute myocardial infarction (AMI), providing good correlation between ST-segment alterations and the culprit coronary artery. In AMI accompanied by combined ST-segment elevation in both anterior and inferior leads, the culprit vessel is either the left anterior descending (LAD) artery or the RCA. The latter has been reported to be associated with proximal RCA occlusion2, as it was in the reported patient. If the ECG is abnormal, cardiac monitoring may be reasonable for 24 to 48 hours or until the patient is asymptomatic and hemodynamically stable. Normal ECG and no symptoms or other injuries after a short period of observation allow patient’s discharge.

If the patient is hypotensive either on admission or during initial observation period, an echocardiography study should be done in order to identify pericardial effusion, tamponade or apical thrombi. Transthoracic echocardiography has limited use in evaluating blunt cardiac trauma because most patients also have significant chest wall injury. In stable patients, transesophageal echocardiography is a more sensitive test3. No correlation among serum assays (CPK-MB, cardiac troponin T, cardiac troponin I) and identification and prognosis of injury has been demonstrated in blunt cardiac injury4. Therefore cardiac enzyme screening is not recommended by the EAST guidelines unless one is evaluating concomitant coronary artery disease.

Blunt chest trauma may cause many types of cardiac injury. Arrhythmia, cardiac contusion, and acute myocardial infarction are among the most common injuries5. In elderly patients, ischemia is usually induced by hemorrhagic shock, rather than from direct cardiac injury. Coronary artery dissection is a rare clinical condition that can be caused by trauma, iatrogenic or may occur spontaneously. Coronary artery dissections are more common in left anterior descending artery (76%), less common in right coronary artery (12%), and they rarely appear in the left circumflex artery (6%)6. A small number of cases have been reported from blunt trauma such as waterskiing4, contact sports such as basketball7 and football6 and high-speed impacts such as motorcycle8,9 or motor vehicle collisions10-13. Iatrogenic dissections are rare. Usually occur during coronary angiography (3-6 patients per 10,000 angiograms) and most commonly are seen in right coronary artery. Spontaneous dissections are more common in women with 25-33% occurring during pregnancy or the peripartum period14,15.

Treatment of coronary artery lesions varies depending on the mechanism, the co-morbidities and the degree of hemodynamic stability of the patient. In hemodynamically stable patient with minimal injuries conservative management that includes anticoagulation and observation is suggested. Fibrinolysis is contraindicated in multiply injured patients. Revascularization may be achieved by percutaneous techniques or with coronary bypass depending upon the location of the lesion. Patients with left main coronary artery (LMCA) lesion or those with a high-risk of bleeding will likely need to be submitted to coronary bypass grafting (CABG)15. Lesions isolated to the LAD or RCA can be treated with stent placement15.

Coronary artery dissection following blunt chest trauma is a rare but potentially devastating complication. Early diagnosis and treatment is crucial to survival. Coronary angiography and PCI should be performed immediately, even in the absence of cardiac tamponade or major hemorrhage because thrombolysis is contraindicated in multi-injured patients.