Skip to content
hippokratia.gr > Volume 19 (2015) - Issue 1 > Difference in efficacy of proton pump inhibitor between new-onset and recurrent gastroesophageal reflux disease: Result from a study of on-demand versus continuous maintenance therapy in Japan

Background-Objective: No study has focused on the difference in efficacy of maintenance therapy between patients with new-onset and recurrent gastroesophageal reflux disease (GERD). The aim of this study is to reveal this point.

Methods: Endoscopically proven GERD patients who had completed 8-week initial therapy were sequentially randomized to continuous arm (Omeprazole 20mg od) or on-demand arm (Omeprazole 20mg on-demand). Patients filled in daily symptoms and tablet usages for 24 weeks. Patients underwent upper GI endoscopy at 24 weeks. Symptom relief was defined as no symptoms for>6 days during a week. The numbers of patients who achieved symptom relief and mucosal healing were compared between the new-onset and recurrent groups in the continuous arm and in the on-demand arm, respectively.

Conclusion: Since therapeutic response during maintenance therapy was poor in recurrent GERD, continuous therapy is recommended in order to maintain symptom-relief and mucosal healing. Hippokratia 2015, 19 (1): 53-56.

A systematic review reported that the prevalence of GERD is as high as 10%-20%, whereas its incidence is as low as 4.5-19.6 per 1000 person-years, suggesting that GERD is likely to persist for many years, on average 18-44 years3. In other words, GERD is considered likely to recur. Although the therapeutic response during maintenance therapy might be different between patients with new-onset and recurrent GERD, no study has focused on this point. The aim of this study is to reveal whether there is any difference in symptom-relief between new-onset or recurrent GERD during the on-demand versus continuous maintenance therapy.

This is a post-hoc analysis of maintenance therapy of GERD consisting of non-erosive reflux disease (NERD) and reflux esophagitis (RE), which was designed as a prospective parallel randomized open label study at a single university hospital between April 2009 and April 20134.The Juntendo University ethics committee approved the study protocol. The performance of this study adhered to the principles of the Declaration of Helsinki for medical research involving human subjects.

The original study design has been published previously4. In this study, patients were re-classified into new-onset GERD and recurrent GERD groups according to their patients’ profile.Therefore, difference of patients’ characteristics at baseline between new-onset and recurrent GERD was compared. This study analyzed the efficacy of PPI in patients who were new-onset or recurrent GERD by evaluating daily symptom charts during the maintenance therapy. Recurrent patients were defined as patient who had received internal medication for GERD. Briefly, endoscopically proven GERD patients who had completed 8 weeks initial therapy were sequentially randomized to a continuous arm (Omeprazole 20mg od) or a non-demand arm (Omeprazole 20mg on-demand). The diagnosis of GERD was established by upper GI endoscopy and classified according to the modified Los Angeles (LA) classification grades M, A, B, C or D before the initial PPI treatment. The patients provided written informed consent to participate in this study. Grade M indicates a minimal change in the modified LA classification that expresses erythematous changes (red) and acanthotic changes (white)5. Randomization was conducted using a computer generated randomization list that was created by a third party. Patients filled in daily symptoms and tablet usages on the daily chart for 24 weeks. Symptom relief was defined as no-symptoms on 6 or more days a week. The numbers of patients who achieved symptom relief during a maintenance therapy were compared between the new-onset and recurrent groups in the continuous arm and in the on-demand arm, respectively. Upper GI endoscopy was performed at 24 weeks. We analyzed data from the daily chart using the full analysis set. Overview of study design is shown in Figure 1. 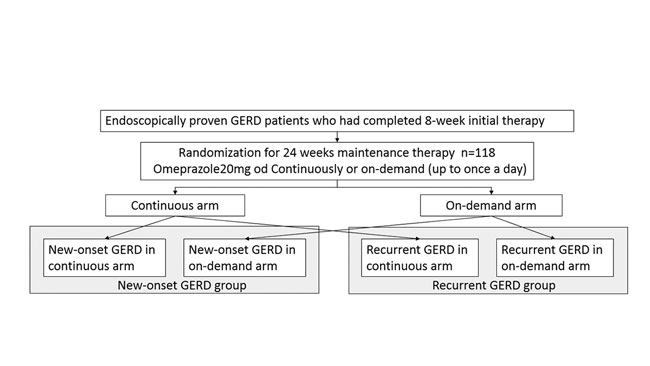 The results of the inter-group differences were analyzed using the Chi-square test and Fisher’s exact test.Statistical significance was defined as p < 0.05 (two-sided). 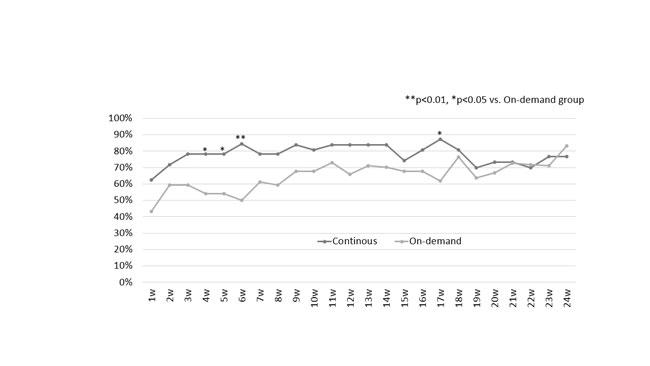 Figure 2. Percentage of patients who were symptom free for 6 or more days a week as recorded on a daily chart in the newonset GERD group. **p<0.01, *p<0.05 vs. On-demand group. 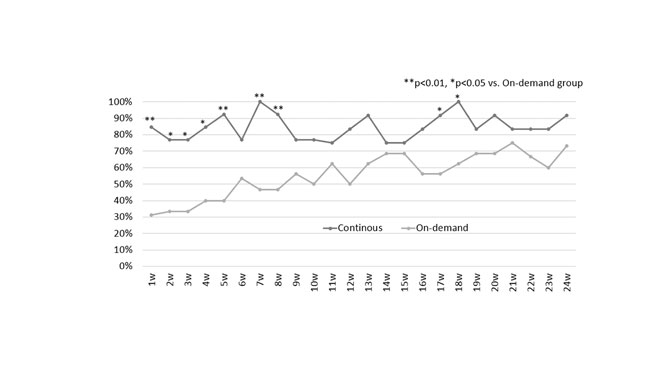 Figure 3. Percentage of patients who were symptom free for 6 or more days a week as recorded on a daily chart in the recurrent GERD group. **p<0.01, *p<0.05 vs. On-demand group. 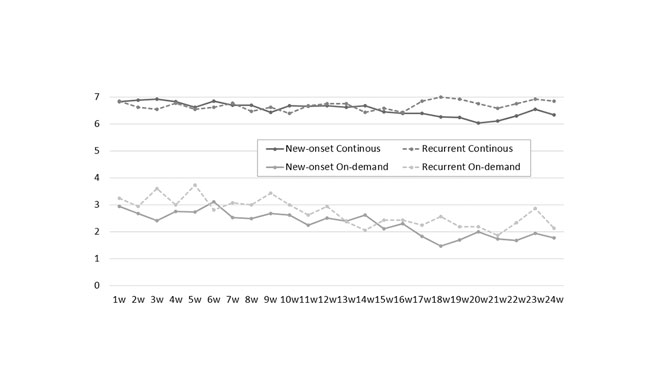 Figure 4. Mean number of consumed tablets per week recorded on a daily chart.

GERD is known as being likely to recur. Indeed, the recurrence rate after 6 months without maintenance therapy was reported to be about 50% to 100%6-9. However, even though they took PPIs during maintenance therapy, some patients could not achieve mucosal healing. Several factors contribute to relapse. A meta-analysis revealed that pre-treatment severity of the disease, young age, non-smoking and moderate/severe regurgitation before trials were associated with a higher relapse rate6. A study onJapanese patients described that relapse occurred in 11% of patient with RE under PPI administration, and that the risk factors were hiatal hernia, severe RE, H. pylori negativity, no mucosal atrophy, nonsmoking, female and <150 cm height10. In this study, the characteristics of patients in the recurrent group demonstrated that they had higher BMI and were drinking more alcohol than did those in the new-onset group. Indeed, obesity is related to GERD11,12. However, the BMI of patients in both groups was less than 25, which is within the normal range in this study. Therefore, BMI differences may have less clinical implications. Alcohol is reported as one of the risk factors for GERD13,14. Since there were more alcohol drinkers in the recurrent group in this study it may suggest that drinking of alcohol is also a risk factor for recurrence of GERD. The mechanisms by which PPI resistance develop in GERD include ineffective control of gastric acid secretion, visceral hyper sensitivity, ultrastructural and functional changes in the esophageal epithelium15. Since it is well known that alcohol induce mucosal injury, alcohol would disturb pharmacological effect of PPI. That is, deterioration of PPI resistance by alcohol would result in recurrence.

To the best of our knowledge, the different therapeutic approaches in managing recurrent GERD and new-onset GERD have not been analyzed, so this is the first study to shed light on this issue. This study demonstrated that the percentage of patients with symptom relief was lower in the on-demand arm than that in the continuous arm, especially in the recurrent disease group. Regarding the tablet consumption in each week, patients in both the continuous and on-demand arms took an equal number of tablets regardless of whether they had new-onset or recurrent GERD. These results suggest that on-demand therapy is insufficient and that patients should take PPI every day as a maintenance therapy in order to maintain symptom relief, especially those with recurrent GERD.

In the management of maintenance therapy in patients with recurrent GERD, continuous therapy is recommended in order to maintain symptom relief and mucosal healing.

Akihito Nagahara has served as a speaker for Astra Zeneca.

This study was presented in abstract form as P1023 at 2013 UEGW in Berlin (United European Gastroenterology Journal volume1 supplement 1; 2013, A408).