Background: A Vitamin D Receptor gene (VDR) polymorphism, rs10735810 (Fok1), has been associated in the past with idiopathic short stature (ISS) in a linkage study. We have investigated the association of the same, as well as a different polymorphism in the same gene [rs731236 (Taq1)] with ISS, in an independent study in Greek children.

Methods: The VDR rs10735810 (Fok1) and rs731236 (Taq1) polymorphisms were genotyped in a group of ISS children (n= 47) and an age and sex-matched group of normal height children (n= 60) from northern Greece. Genotyping was accomplished through established PCR-RFLP methods.

Conclusions: The above results, together with recent evidence related to the functionality of the rs10735810 polymorphism, cannot exclude an involvement of VDR in the pathogenesis of ISS. Hippokratia 2015, 19 (1): 25-29.

Short stature constitutes a serious cause of concern and anxiety for affected children and their parents, who seek professional consultation and – if possible – therapeutic intervention1. In the absence of an identifiable disorder, Idiopathic Short Stature (ISS) is – somewhat arbitrarily defined – as having an age-adjusted height more than 2 standard deviations (SD) below the mean, for a given population2,3. ISS is usually diagnosed in childhood, with an average age of referral at 10 years of age4. ISS diagnosis takes into account known genetic, hormonal, systemic and environmental factors, the children’s family history of stature, and age-related bone and sexual development. Diagnostic subcategories of ISS include “constitutional delay of growth and puberty” (CDGP), “familial short stature” (FSS) or “ISS in its narrow meaning” although it is often hard to distinguish between them in clinical practice3.

Previous studies, mostly focused on the growth hormone (GH) – insulin-like growth factor (IGF-1) axis, have tried to shed light into the aetiology of this highly heritable trait5,6. However, identifiable abnormalities along this axis account for only a minority of ISS cases, raising questions as to the wisdom of using GH therapy for treating children with ISS, especially given the high cost, inconvenient dosing and largely unknown long term adverse effects7-9. Deletions and mutations in and around the homeobox transcription factor SHOX gene, have also been causally associated with ISS, yet they characterize only about 5% of tested cases10, while another 10% of ISS cases may be explained by rare copy number variations (CNVs)11. On the other hand, a C to T substitution in the translation initiation site, in exon 2 of the vitamin D receptor (VDR) gene, the so-called VDR Fok1 polymorphism (rs10735810/rs2228570), has also been associated with ISS, in a genome-wide linkage study with ISS children from Germany12. According to that study, the C (F) allele is over-transmitted to children and adolescents with ISS, leading to a population attributable risk as high as 34%12. Curiously enough, no attempt to independently replicate this finding has been published since, to the best of our knowledge.

The aim of this study was to examine the association of the VDR rs10735810 polymorphism with ISS, in an independent study group that included children from northern Greece (regions of Macedonia and Thrace). The association of another common VDR polymorphism, TaqI (rs731236), with ISS was also tested for comparison.

Recruitment of children with ISS was accomplished from referrals to the endocrinology unit of the 4th department of paediatrics, of the medical school of Aristotle University of Thessaloniki, at Papageorgiou general hospital, for short stature evaluation, from May 2008 to December 2010. Perinatal, family and personal history was taken from all families and each child underwent a thorough physical examination and extensive laboratory testing to exclude all identifiable causes of symmetric short stature. In all children with ISS two provocation tests were performed in order to exclude growth hormone deficiency. Furthermore, in all female participants a karyotype analysis was performed in order to exclude Turner syndrome. There was no genetic testing for other causes. Hypothyroidism and celiac disease were also excluded by measurement of thyroid hormones/TSH and specific antitransgluatminase antibodies, respectively.

Forty seven Greek children were finally included in the ISS study group. The control group included 60 Greek children of similar age and gender distribution to the ISS group, selected from among outpatients who presented at our Department during the study period, for a variety of reasons. Exclusion criteria for the enrolment in the control group were short stature and chronic or endocrine disease, including obesity. Demographics of the control and study groups are shown in Table 1. The study was approved by the Ethics Committee of the Medical School of the Aristotle University of Thessaloniki, and informed consent was acquired from all participants’ parents/guardians. The study conformed fully to the Declaration of Helsinki for biomedical research on human subjects.

Height measurements were performed using a Harpenden stadiometer (Holtain, Crymych, UK). Height-for-age z-scores (HAZ) were calculated for each participant in accordance with World Health Organization (WHO) anthropometric standards. The Z-score system expresses anthropometric values as several standard deviations (SDs) below or above the reference mean or median value. Because the Z-score scale is linear, summary statistics such as means, SDs and standard errors can be computed from Z-score values. Z-score summary statistics are also helpful for grouping growth data by age and sex. The summary statistics can be compared with the reference, which has an expected mean Z-score of 0 and a SD of 1.0 for all normalized growth indices. In order to classify children into an ISS subtype, target height, pubertal stage and bone age were determined. The subjects were divided into different pubertal stages, according to Tanner. A child target height was calculated, correcting for secular trend (4.5 cm per 30 years), from the formula: the target height of a boy = [(father’s height + mother’s height +13)/2] + 4.5 cm, and the target height of a girl = [(father’s height + mother’s height – 13)/2] + 4.5 cm. The target range spanned between 1.3 SD (approximately 9 cm). The Greulich and Pyle method was used to calculate bone age. 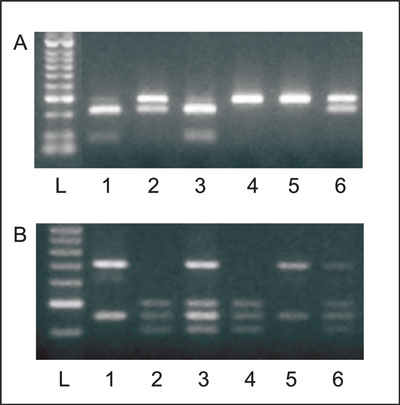 The χ2 goodness-of-fit test was used to examine possible deviation of genotype distributions from the Hardy-Weinberg equilibrium. The χ2 test of independence was used to compare genotype and allele frequencies in the ISS and control groups.

The association of the rs10735810 polymorphism with HAZ was accomplished with a general linear model with type III sum of square statistics. p= 0.05 was used as the limit of statistical significance. The Statistical Package for the Social Sciences (SPSS) version 20.0 (SPSS Inc., Chicago, IL, USA) was used for all calculations.

All participants were successfully genotyped for the rs10735810 polymorphism, whereas genotyping for the rs731236 polymorphism failed to produce unequivocal results in the case of three controls and one ISS individual. There was no statistically significant deviation from the Hardy-Weinberg equilibrium with respect to any of the two VDR polymorphisms, in either group of children (Table 2). In the control group, the distributions of genotype frequencies for both polymorphisms were very similar to those previously published for Caucasian and, more specifically, Greek populations (Table 2).

When comparing the genotype frequency distributions for the two polymorphisms, between control and ISS children, we became aware of an apparent underrepresentation of the rs10735810 TT (ff) genotype among the latter. While this difference did not reach statistical significance, it does register as a strong trend when the rs10735810 C (F) carriers are pooled together (p= 0.076; Odds ratio= 0.165, 95% CI= 0.025 – 1.094). No significant differences were found regarding the rs731236 polymorphism (Table 2).

Given the trend for the underrepresentation of the rs10735810 TT genotypes in the ISS group, we have examined the association of the rs10735810 polymorphism with HAZ, in the total sample as well as in each individual group of participants, with univariate analysis, using sex as a covariate. Results are shown in Table 3; no statistically significant association was detected.

The vitamin D receptor (VDR) binds 1,25(OH)2D3 and, following heterodimerization with the retinoid X receptor (RXR), interacts with vitamin D response elements (VDREs) in the promoter and enhancer regions of genes involved in calcium and phosphorus homeostasis, and in cell growth and differentiation, among others16-18. Hence, over the last two decades, the association of VDR to height was examined in numerous studies, the majority of which – as well as related meta-analyses – pointed to a very small, if any, effect however19,20. Moreover, VDR was not included among the many genes identified in genome wide association (GWA) studies21-23. While, on the other hand, adult height in general appears to be an extremely polygenic trait – with as many as 180 loci accounting for as little as 10% of its phenotypic variation – short stature is considered an extreme phenotype wherein the effect of a relatively limited number of genes/ polymorphisms may be amplified to the extent that they become more easily identified24. In our study, we fell short of detecting a statistically significant association between the VDR rs10735810 (FokI) polymorphism and short stature, but we did notice a considerable underrepresentation of the TT (ff) homozygotes among ISS children. The distributions of the VDR rs731236 (TaqI) genotypes on the other hand, were almost identical between ISS children and children of normal height. While our results do not represent an independent confirmation of the study by Dempfle et al12, their high attributable risk was by no means detected, it is encouraging that they point essentially to the same direction, as that study reported an over-transmission of the C (F) allele and no association of the rs731236 polymorphism with ISS.

Recently published evidence supports the functional significance of the VDR rs10735810 (FokI) polymorphism, in terms of altered transactivation of vitamin D target genes25,26. Vitamin D receptor response elements (VDREs) have been identified in the promoter regions of the genes encoding GH and IGF-binding protein 3 (IGFBP-3)27,28 while vitamin D is known to regulate circulating IGF-1 and the gene expression of its receptor and of various binding proteins29. Short children with GH deficiency were excluded from our study, but IGF-1 levels were unfortunately not recorded for the majority of the participants, due to technical difficulties, and a study of the effect of rs10735810 on serum IGF-1 could not take place. On the other hand, most ISS children tend to have normal serum levels of IGF-1 and the effect of the polymorphism -if any- could be exerted on IGFBP-3 rather than on IGF-1 itself30. Moreover, the directionality of the effect rs10735810 exerts on VDR-driven transactivation appears to depend on both race and target gene26, making a prediction of the effect of the polymorphism on the gene expression of GH or IGFBP-3 impossible at this point.

A serious limitation of our study is, admittedly, its small sample size. As it turns out, for the recorded difference of the rs10735810 genotype distributions between ISS and control children to be statistically significant with an 80% power of detection, we would need to have twice as many participants. Our results can only characterized then as preliminary. Another difficulty is the possible confounding effect of non-genetic factors, acting either in utero or post-partum31. This may be particularly true of vitamin D, where the optimal levels for VDR function may be individual-specific26. Even so, our tentative conclusion is that VDR is an ISS gene which most likely exerts its effect through the GH – IGF-1 axis. Additional research should help resolve this issue.

The authors would kindly like to thank all children and adolescents who participated in the study as well as their parents/guardians.