Skip to content
hippokratia.gr > Volume 20 (2016) - Issue 1 > CADASIL presenting with spontaneous intracerebral hemorrhage: report of a case and description of the first family in Northern Greece

Introduction: CADASIL (cerebral autosomal dominant arteriopathy with subcortical infarcts and leukoencephalopathy), the most common inherited cause of stroke and dementia in adults, has been described in six Greek families. Common presenting manifestations include migraine with aura, brain ischemia, mood disorders and cognitive decline. Spontaneous intracerebral hemorrhage (SICH) rarely occurs in CADASIL and only exceptionally as the first clinical manifestation. Case description: We have previously reported the sixth Greek family with CADASIL and in particular, two brothers in whom the genetic testing documented a classic mutation of the NOTCH3 gene (Arg169Cys). In this report, we describe the 30-year-old son of the second brother, who suffered a thalamic SICH as the presenting manifestation of CADASIL, in the absence of arterial hypertension or antiplatelet drug use. Conclusion: Patients with acute subcortical infarcts, leukoencephalopathy, a history of migraine, mood disorders, and dementia, should always raise the suspicion of CADASIL. However, a SICH, even in the absence of classical risk factors for hemorrhage, is possible and should not exclude the diagnosis of CADACIL. Hippokratia 2016, 20(1): 76-79

CADASIL is the most common heritable cause of ischemic stroke and dementia in adults. This acronym was suggested to describe the clinical syndrome resulting from mutations of the NOTCH3 gene on chromosome 191. NOTCH3 (Notch homolog 3) encodes a transmembrane receptor expressed mainly in arterial smooth-muscle cells. Since CADASIL was established as a distinct entity, more than 500 families have been reported worldwide, but its real prevalence remains unknown. Nevertheless, CADASIL is considered responsible for 2% of lacunar strokes with leukoaraiosis in patients younger than 65 years of age and for 11% in patients younger than 50 years of age1-2. Hitherto, six Greek families with CADASIL have been reported. We recently described the first family in Northern Greece and in particular, two brothers with an Arg169Cys mutation of the NOTCH3 gene3. In this article we report the son of the second brother, a young man without known cerebrovascular risk factors, who presented a deep spontaneous intracerebral hemorrhage (SICH). The occurrence of SICH in the course of CADASIL is rare and usually associated with hypertension, antiplatelet drug use and older age4-7. To the best of our knowledge, this is the first case of CADASIL presenting with SICH in a previously healthy young adult.

A 30-year-old man, son of a known CADASIL sufferer (Patient 3), was hospitalized in May 2015 because of sudden headache and numbness of his right hand. The computed tomography scan showed a left thalamic hemorrhage (Figure 1). The patient had no medical history and was not under any medical therapy. He was normotensive and had never suffered from migraine. Brain magnetic resonance imaging (MRI) scans, one and four months after the clinical incidence, documented leukoencephalopathy around the frontal horns and the atria of the lateral ventricles and asymptomatic lacunar infarctions at the basal ganglia. Of note is that cerebral microbleeds (CMBs) were absent from gradient echo sequences (Figure 1). Genetic testing documented the same heterozygous mutation of the NOTCH3 gene that his father had been diagnosed with [exon 4, Arg169Cys (CGC/TGC)]3. 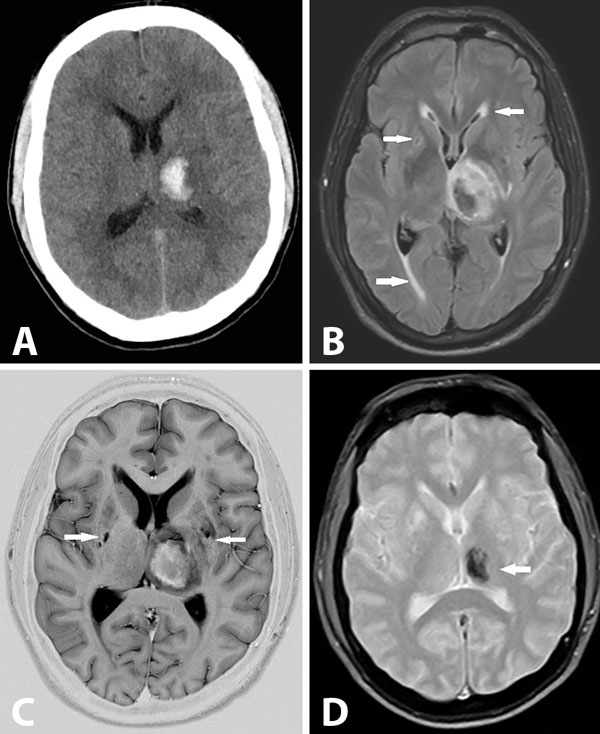 A 50-year-old man was admitted five years earlier with an episode of sudden left-sided hemiparesis. Until then, apart from heavy smoking, his medical history was unremarkable. He reported that his brother had been diagnosed with “multiple sclerosis” (MS). Brain MRI revealed extensive leukoencephalopathy and a recent infarction located in the right internal capsule (Figure 2), compatible with the clinical presentation. All the other clinical and laboratory examinations were normal. Due to the imaging characteristics of the encephalopathy, the recent subcortical stroke, and the family history, the suspicion of CADASIL was raised, and genetic testing was conducted, revealing a typical for CADASIL heterozygous mutation in the NOTCH3 gene [exon 4, Arg169Cys (CGC/TGC)]. In September 2015, the patient presented acutely severe dysarthria, dysphonia, and dysphagia, consistent with pseudobulbar palsy. As expected, MRI documented a new ischemic stroke at the left semioval center which, in combination with the old infarction at the right side, caused the clinical syndrome (Figure 2). 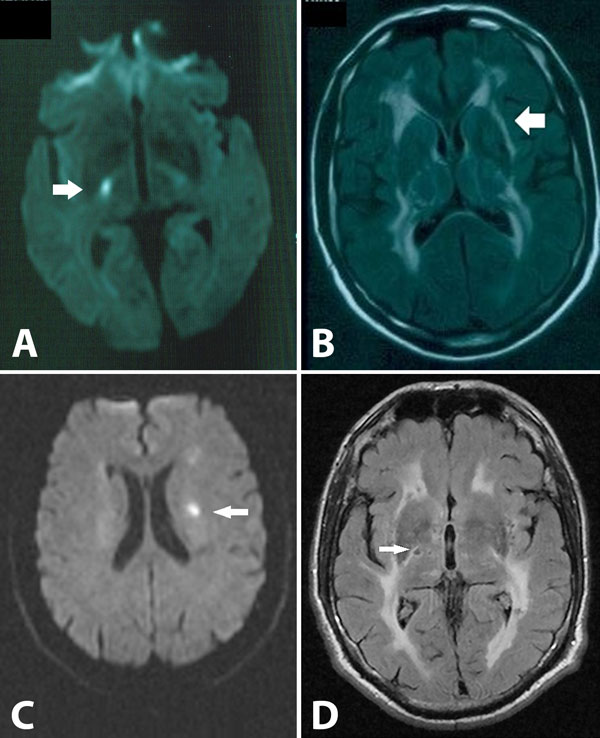 A 54-year-old man with no medical history, smoker, was hospitalized at the age of 45 for craniocerebral injury. At that time, he had no neurologic deficit. One month later, during a regular control, an initial brain MRI indicated “demyelinating lesions”. Four months later, the patient was admitted to our Department complaining of numbness of the left arm and leg which, within few hours, evolved into left hemiparesis. At that time, the main differential diagnosis included MS and acute ischemic stroke and the patient was finally treated as possible demyelination with intravenous corticosteroids, without improvement. In 2009, the patient was hospitalized again for further investigation of his left, by then spastic, hemiparesis. Brain MRI identified an extensive leukoencephalopathy (Figure 3). The findings were primarily considered as demyelinating lesions suggestive of MS. An extensive clinical and laboratory investigation was negative. Furthermore, genetic testing for CADASIL that was reported to have been conducted in a British laboratory was also confirmed as “negative”. Two years later, and after the recent diagnosis of CADASIL in his younger brother (Patient 2), the family mutation was finally verified. 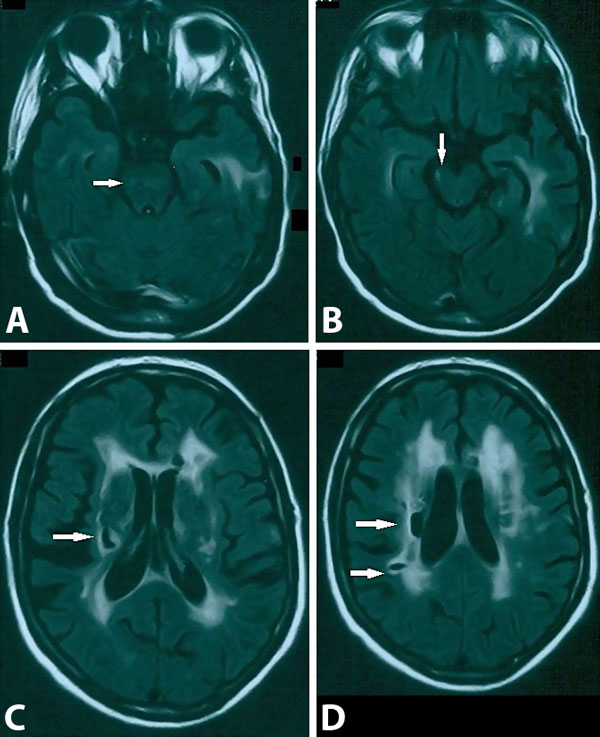 Figure 3: Abnormal magnetic resonance signal (FLAIR, axial) in both the anterior temporal lobes (more prominent on the left), in the basis pontis (A, arrow) and in the ventral midbrain (B, arrow). The leukoencephalopathy extends periventricularly, to the basal ganglia and the external capsules (C, arrow). Notice multiple big subcortical gliotic areas suggestive of old ischemic strokes, especially next to the body of the right lateral ventricle (D, arrows).

Regarding their family history (Figure 4), their mother died at the age of 63 from acute ischemic stroke (without any further information) and their father at the age of 63 from acute myocardial infarction. They have two older sisters (59- and 57-year-old) with no medical history, who both denied imaging or genetic investigation. Similarly, the other descendants of the two brothers remain asymptomatic. 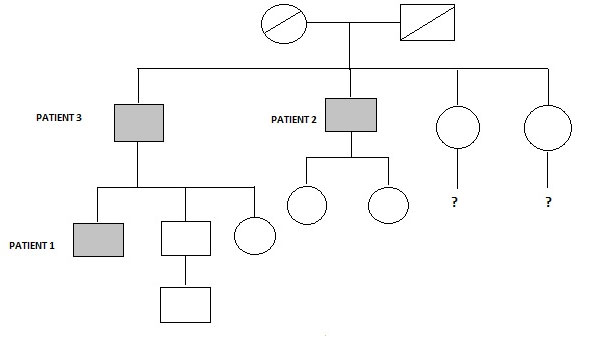 Figure 4: Pedigree tree of the Greek family with CADASIL. I. The grandfather of Patient 1 died of myocardial infarction at the age of 63 and the grandmother died of undetermined “stroke” also at the age of 63. II. The older sisters of Patients 1 and 2 live in Canada and are possibly asymptomatic. All other individuals in the tree are currently asymptomatic.

This report raises three important issues. The first concerns the incidence of SICH in patients with CADASIL. Until recently, it was believed, that SICH was not compatible with CADASIL. On the contrary, there are new data in the literature regarding patients who were diagnosed with CADASIL after a presenting SICH, as well as patients in whom SICH followed a CADASIL diagnosis by many years4-7. Nevertheless, the number of relevant cases remains short. The most important issue concerns the identification of patients with CADASIL, who are susceptible to SICH. Cerebral microbleeds (CMBs) in gradient echo sequences are found in 31-69% of patients with CADASIL4-7 and are considered a potential risk factor for SICH4. Hypertension represents a major risk factor for SICH. Furthermore, SICH and CMBs are mostly located in areas that are also affected by classical hypertensive brain hematomas. This may be explained by the fact that, in both cases, abrupt fluctuations in blood pressure could cause rupture of the already fragile arterioles5. A third risk factor for SICH in patients with CADASIL pertains to the use of antiplatelet or anticoagulant drugs. Many patients are reported to have suffered SICH soon after the initiation of antithrombotic therapy7. Until now, there has not been any correlation between a particular mutation in NOTCH3 gene and the incidence of SICH. Patient 1 of the current report is exceptional: he is the youngest known adult who presented SICH as the first clinical feature of CADASIL, in the absence of pertinent risk factors such as CMBs, arterial hypertension or antithrombotic treatment.

The second issue concerns the not so rare confusion of CADASIL with MS. In both diseases, the clinical presentation can be either progressive or relapsing with residual deficits. However, careful interpretation of the brain MRI can guide the differential diagnosis. In our case, the older brother (Patient 3) was considered and treated for many years as a patient suffering from MS, until the younger brother displayed the same neuroimaging pattern, which reinforced the suspicion of CADASIL. Nevertheless, the existence of symmetrical leukoencephalopathy with participation of the anterior temporal lobes and the external capsule was suggestive of CADASIL8. Furthermore, lesion localization in tectal areas of the midbrain and the pons was indicative of ischemia, contrary to MS, where demyelination involves more often the tegmental segments9. Finally, the presence of multiple sizable gliotic lesions indicated the coexistence of older infarctions (lacunes) in these areas. Regarding Patient 2, the existence of cytotoxic edema in the internal capsule, a typical localization for lacunar strokes, clearly indicated the ischemic nature of the subjacent leukoencephalopathy. On the contrary, acute demyelinating lesions are usually characterized by increased/heterogeneous diffusion and less often by restricted diffusion10.

The third issue concerns the methodology and interpretation of the genetic analysis. The latter should always be conducted by certified laboratories with relevant experience. In the case of Patient 3, despite the strong clinical suspicion for CADASIL, the first genetic control was reported negative and resulted in a falsely presumed diagnosis of MS. On the other hand, the genetic testing for Patient 2 was conducted by the laboratory where the disease was originally described (CERVCO). Due to the discrepancy between the prior and current genetic analysis for Patient 3, the analysis was repeated by CERVCO in a different blood sample and yielded identical results [exon 4, Arg169Cys (CGC/TGC)].

SICH in young patients with CADASIL without risk factors, such as CMBs, hypertension or antithrombotic therapy is extremely rare. As the identification of CADASIL candidates for SICH remains an unmet need, the description of new cases is valuable and enriches our knowledge on the spectrum of clinical manifestations of the disease. The need for strict control of hypertension seems reasonable particularly if antithrombotics are used for primary or secondary stroke prevention in CADASIL.

CADASIL should always be considered in the differential diagnosis of middle-aged patients with symmetrical lesions mainly located in the periventricular white matter; with a medical history of migraine with aura, subcortical ischemic strokes, dementia or mood disorders. A positive family history is important but not necessary because the patient may bear a de novo mutation. Genetic testing of the asymptomatic relatives engenders important ethical dilemmas, similar to Huntington’s disease. Therefore, to avoid false negative or positive results, it is of utmost importance to conduct all relevant analyses in certified laboratories with experience in the field.

The authors declare that they have no competing interests.

We thank the Editorial Board of Neurologia for their kind written permission to reproduce part of the data concerning patients 2 and 3, who had been originally reported in Neurologia, 2014; 23: 8-13.