Ascariasis is a well-known helminthic infestation, caused by the parasite Ascaris Lumbricoides,with its highest prevalence being in developing countries, affecting people of poor social status.

We report the case of a 6-month-old male infant who presented with epigastric pain, distension, vomiting, and fever and was admitted to the hospital. 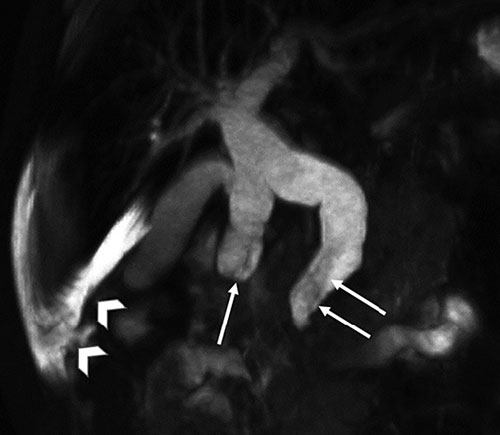 The patient was treated with an antihelminthic (Mebendazole 100 mg twice daily for three days) and a spasmolytic (Butylscopolamine) per os. The success of treatment was confirmed by clinical examination, repeat biochemical tests and ultrasonography. He fully recovered and was discharged home well, after two weeks.

Biliary ascariasis is predominantly a disease of adulthood with a very low incidence in children, especially in infants. Serious complications such as biliary obstruction can be caused by worms migrating across the papilla of Vater, mimicking clinically acute surgical abdomen. A narrow biliary tract is considered to be an anatomical barrier that prevents the movement of worms to the biliary tree. The presence of worms in the biliary tract is quite rare, especially in infants. To date, no published cases of biliary ascariasis in infants can be found in the literature. Ultrasonography seems to be the preferred confirmatory diagnostic technique due to its high sensitivity and specificity in the detection of the worms in the biliary tree, and detection of movements of Ascaris, differentiating whether the worm is alive1. MRCP is challenging to be performed with good quality results in very young children due to the small caliber of the pediatric bile ducts and to motion artefacts2, as it was in our case. It is an excellent diagnostic tool, and it should be limited to cases with non-confirmatory ultrasonography. If conservative treatment fails, surgery is mandatory. To our best knowledge, this is the youngest patient reported with biliary ascariasis confirmed by MRCP.