Acute myocardial infarction in most cases is characterized by atherosclerotic plaque rupture, ulceration, fissure, erosion or dissection with resulting thrombus presence in coronary arteries leading to imbalance between myocardial oxygen supply and demand and subsequent myocardial necrosis1.On the other hand, coronary artery embolism (CE) is a rare but important nonatherosclerotic cause of acute myocardial infarction, and atrial fibrillation (AF) is the most frequent cause of CE2.

We describe the case of a 69 years old woman who presented to our hospital with ST elevation myocardial infarction (STEMI) and permanent AF and eventually treated with thrombus aspiration from the left descending coronary artery (LAD).

A 69-year-old woman with a history of diabetes mellitus, arterial hypertension, dyslipidemia and persistent AF previously treated with clopidogrel 75 mg, presented complaining of chest pain radiating to the left arm and shoulder, which started 30 minutes before her arrival. Electrocardiogram demonstrated AF and ST-segment elevation in the anterolateral leads (Figure 1). Fifteen minutes after first medical contact she underwent fibrinolysis with 45 mg tenecteplase and she was also treated with a combination of antiplatelet agents (aspirin plus clopidogrel), metoprolol, atorvastatin and anticoagulation with low molecular weight heparin- enoxaparin. One hour later she was free of symptoms, but ST elevation did not improve and 12 hours later patient underwent a coronary angiography. High sensitivity troponin T was elevated at 5.33 ng/l (normal <0.014 ng/l). Coronary angiography, which was performed via right radial artery revealed an image suggestive of a large thrombus in the mid segment of LAD (Figure 2). Manual aspiration via a six French aspiration catheter (Stentys S.A. Paris, France) successfully retrieved a mass from LAD (Figure 3). Coronary angiography post aspiration demonstrated no remaining significant obstructive lesions in the LAD and Thrombolysis in Myocardial Infarction (TIMI)-grade three flow was established (Figure 4). No angioplasty or stenting was undertaken. Right coronary artery and left circumflex artery had no significant obstructive lesions. 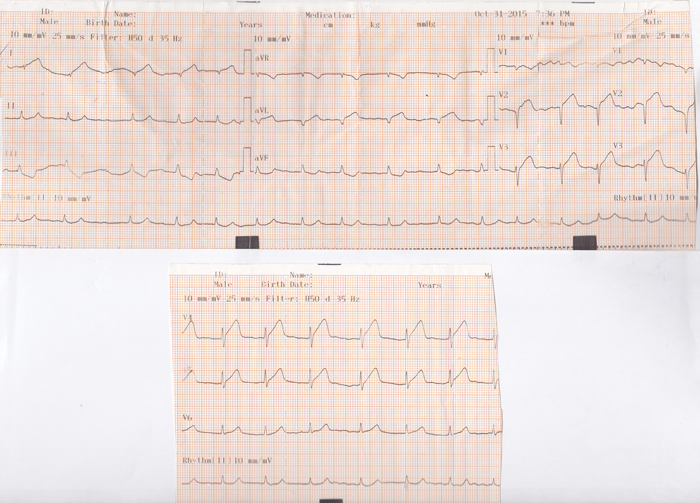 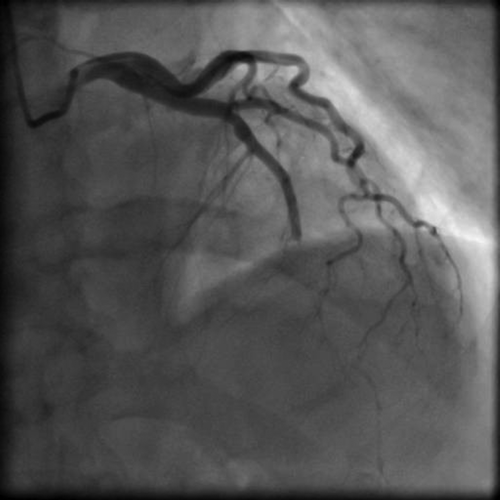 Figure 2: Coronary angiography image suggestive of a thrombotic occlusion in the mid-segment of the left descending coronary artery. 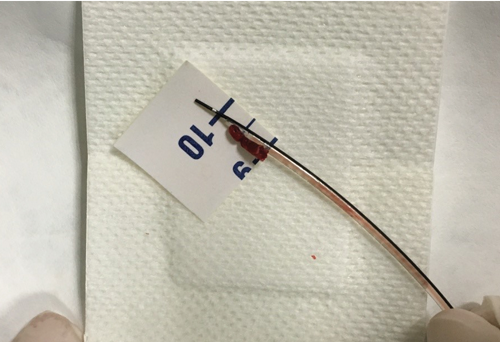 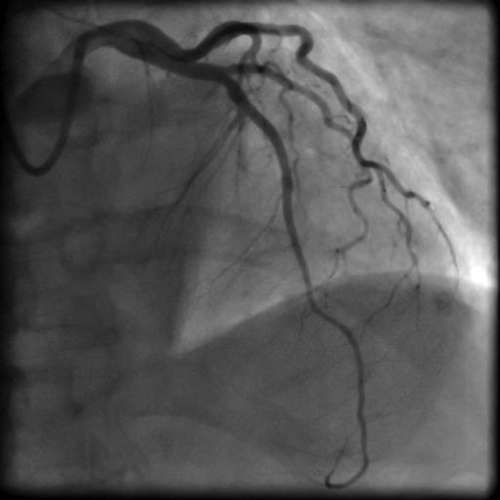 Angiographic appearance (localized filling defect on coronary angiography) combined with her past history of undertreated AF was highly suggestive of coronary artery embolus related to AF as the underline pathophysiology of STEMI. Mass/thrombus appearance as a cast of LAD measured eight millimeters (mm) in length was also consistent with an embolus. Transesophageal echocardiography was not performed and transthoracic echocardiography showed neither thrombus in the cardiac chambers, nor atrial septal defect or patent foramen ovale. She was discharged on the sixth day postinfarction. During her hospitalization, she remained free of symptoms and there were no recurrent ischemic events or other complications.

Nonvalvular AF is the most common cause of systemic embolism, especially of CE3. AF can occur as a complication of STEMI, but in rare cases acute myocardial infarction can be occurred due to coronary artery embolus and those patients represents a high-risk subgroup requiring close follow-up4,5.

In our case, successful reperfusion was achieved by aspiration thrombectomy without balloon dilatation or stenting, which is a very effective method of treating STEMI patients due to coronary artery embolism6. Use of manual thrombectomy devices can be combined with morbidity and mortality benefit, but in some cases myocardial reperfusion is not fully restored as a result of distal thrombus embolization (no-reflow phenomenon)7. On the other hand, optical coherence tomography (OCT) was not performed to exclude an erosion as the cause of thrombus formation and this could be a limitation of this report.

Finally, we have to notice the importance of the appropriate antithrombotic treatment in AF based on CHA2DS2-VASc Score to prevent systemic embolism. As in our case, undertreatment of AF is still very common and antiplatelet therapy is prescribed instead of oral anticoagulation especially in elderly patients14.

In conclusion, STEMI due to coronary embolism in patients with AF is not a very common situation and aspiration thrombectomy can offer a safe and an effective solution for treatment in patients with otherwise normal coronary arteries on coronary angiography.