Recognition of arterial anatomy variations is of grave importance in pancreatoduodenectomy procedures.

We present a case of an aberrant right hepatic artery originating from the superior mesenteric artery, which was discovered incidentally during a Longmire-Traverso procedure. During dissection of the hepatoduodenal ligament and after the division of the common hepatic duct, we identified an arterial structure situated laterally to the portal vein. We proceeded with the dissection along the hepatoduodenal ligament identifying the proper hepatic and common hepatic artery. After division of the pancreas, the artery was dissected completely, revealing its origin from the superior mesenteric artery [aberrant right hepatic artery (ARHA)] (Figure 1). The postoperative course of the patient was uneventful. 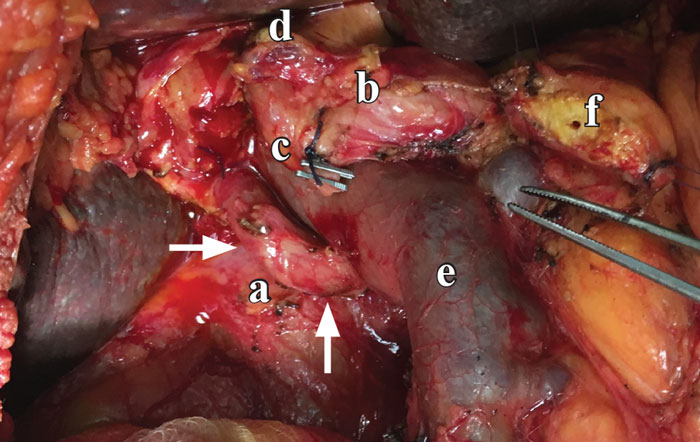 Variants in the arterial anatomy of the liver are not uncommon. Their classification by Michaels and Hiatt1 are the most widely accepted. The presence of an ARHA is the most frequently encountered variation, and it can be either a replaced or an accessory artery (Hiatt Type III, 10.6% incidence). Usually, the ARHA originates from the superior mesenteric artery (SMA), runs lateral to the portal vein, under the head of the pancreas and the common bile duct to the liver. Less frequently it has intrapancreatic or transpancreatic course. Its incidence varies from 11 % to 26.5 % in literature1.

Recognition of those variations is of major importance during pancreaticoduodenectomy (PD) procedures. Careful dissection is essential not only for the preservation of the aberrant artery but also for the lymphadenectomy along the artery. Ligation of a replaced ARHA could lead to right liver lobe ischemia1 or ischemia of the bilioenteric anastomosis. The common bile duct is supplied by branches of the gastroduodenal artery (GDA) and the right hepatic artery. Since GDA is ligated during PD, the bile duct’s arterial supply is only based on the right hepatic artery, and ligation of an ARHA could cause ischemia leading to bilioenteric anastomosis leak and formation of bile fistula.

Preoperative imaging with contrast computed tomography or magnetic resonance imaging scans can reveal the arterial anomalies in most cases. Since small aberrant arteries can be missed, both the radiologist and the surgeon must be alert to such a possibility. In our case, preoperative computed tomography failed to reveal the aberrant vessel. Dissection and preservation of the ARHA is the best choice and is technically possible in most cases. Preoperative recognition of ARHA allows embolization of the vessel to facilitate collateral network development to the right liver lobe and the common bile duct before the operation. This technique is useful in cases where the vessel is involved in the tumor, and its resection is inevitable. In cases of accidental partial transection or resection of the artery, the ARHA can be reconstructed either by primary anastomosis or by re-implanting the vessel to the gastroduodenal artery stump. Finally, a small accessory ARHA can be safely ligated.