Skip to content
hippokratia.gr > Volume 19 (2015) - Issue 4 > A novel surgical tool for the revision hip arthroplasty due to neck stem’s fracture

During revision surgery of total hip arthroplasties, surgeons may come across the challenging complication of a proximally fractured femoral stem, which however maintains sufficient distal fixation. Such cases, although rare, are extremely demanding due to lack of available attachments that would assist surgical explantation of the broken implant. It is herein presented a metal sterilisable surgical tool designed for the removal of the femoral stem broken at the level of the “neck”. Hippokratia 2015; 19 (4): 352-355.

A widely used technique for femoral stem extraction when revising total hip arthroplasties (THA), is the “transfemoral approach”, first described by Wagner1,2. Many surgeons have utilized this technique, with minor modifications3,4. According to this technique, the surgeon performs a longitudinal osteotomy of the femur, exposing and removing the broken femoral stem. Subsequently, following the implantation of the new femoral stem the osteotomized femur is appropriately reduced and fixed preferably with cerclage wires. Additionally to the general biological hazard of THA revision, with the Wagner osteotomy, the surgeon inevitably introduces an additional issue, namely, the osteosynthesis of the osteotomized femur. Furthermore, due to the former intervention, local periosteal anatomy and vascularity are severely affected, possibly endangering the prognosis. For these reasons the first choice, when removing the stem for revision THA, is to try and remove it in a retrograde fashion, without the Wagner osteotomy. Sometimes this is not possible, for example in cases where the stem is broken at the level of its neck, like the case we presented in a previous report5, yet no conventional extraction tools can be used. Thus, the reported technique using the novel tool applies mainly to those cases.

We propose an innovative instrument which can be used for the removal of femoral stems having their neck broken. This is made of a sterilizable surgical grade metal alloy (e.g. stainless steel) and comprises a long shaft, distally equipped with an inverted U-shaped adaptor with two coaxial holes on its jaws. A hammer ergonomically contoured as a cylindrical handle, can freely slide along the shaft and between the lower position of the adaptor and the upper position of stopper end of the shaft (Figure 1). 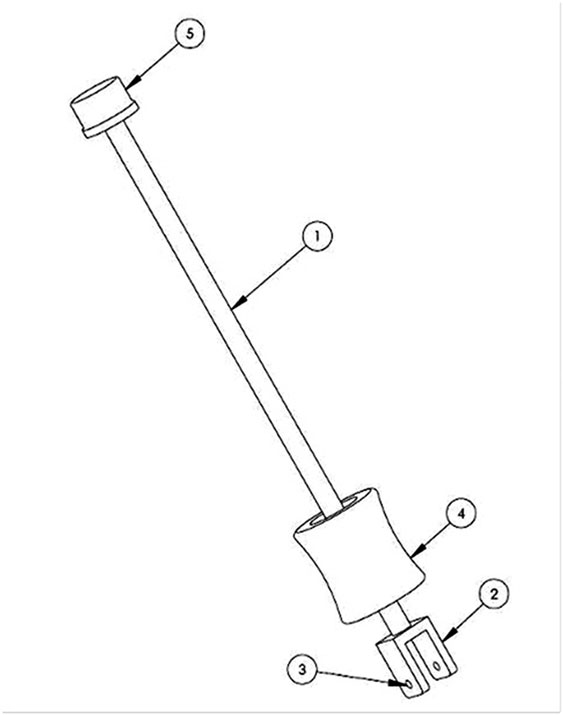 This specially designed extractor (patent No 1006033, IPC Classification: A61F 2/46), was invented, designed, manufactured, sterilized and used for the removal of a fractured at the level of its neck femoral stem. As previously reported5, a 64-year-old man underwent left total hip arthroplasty due to severe osteoarthritis and four years later experienced while walking severe pain and was admitted to the hospital with inability to bear his weight. A neck fracture of the femoral component without bone loss was evident in radiological examination and six days later he underwent revision THA5. During that time, we designed and manufactured this novel extractor and herein we describe the surgical technique which utilises this specially designed extractor for the removal of femoral stems.

The surgeon determines which surgical approach is appropriate for a particular THA revision; the anterolateral, the lateral or the posterior approach. When the broken femoral stem is in sight, the following steps are sequentially taken: drilling of the stem at a proximal area in a transverse direction, creating a hole, slightly larger that the holes of the adaptor (care should be taken for the adequate collection of metallic debris – see also below), (Figure 2); placement of the instrument over the drilled broken stem, with all holes aligned and allowing insertion of a holding pin; removal of minimal amount of bone proximally at the trochanteric level may be necessary to facilitate the placement of the instrument; holding and aligning the long axis of the instrument with that of the femoral stem and canal; performing successive manual strokes of the sliding hammer against end stopper; gradually disturbing and finally disrupting the distal fixation of the stem, initiating extraction (Figure 3, Figure 4, Figure 5). 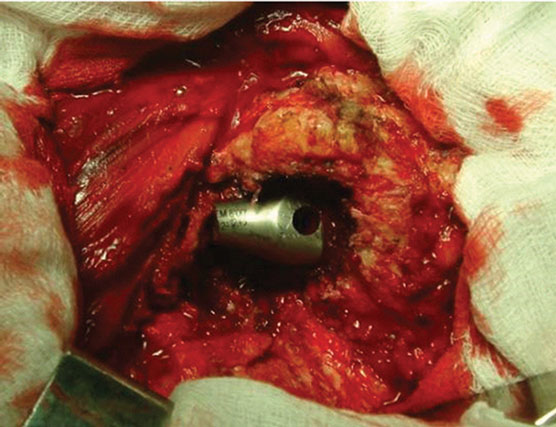 Figure 2: Intraoperative photo showing the drilled hole at the proximal area of the stem. 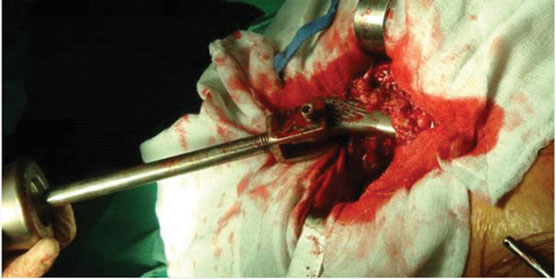 Figure 3: Manual strokes of the sliding hammer manage to extract the stem.

Figure 4: A photo showing the whole instrument merged with the extracted stem. 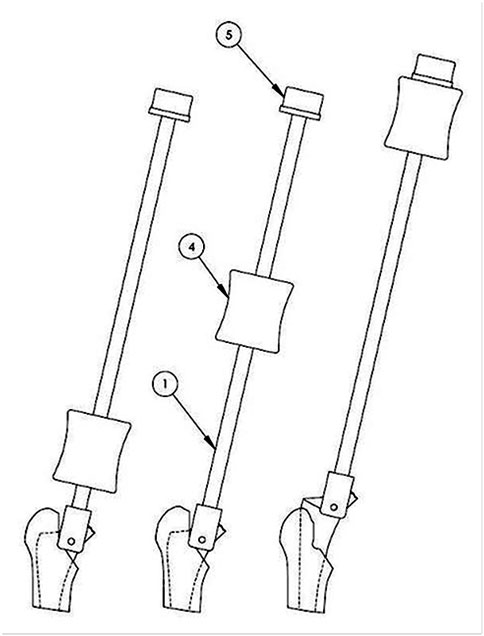 Figure 5: After placement and holding the instrument aligned with the femoral stem and canal (1), successive manual strokes of the sliding hammer (4) against end stopper (5), gradually disturb and finally disrupt distal fixation of the stem, initiating extraction.

For the opening of the hole on the proximal part of the stem close to the broken neck, two cobalt drill bits are used: HSS Co 4.0 mm and HSS Co 6.0 mm, mountable on the electrical surgical instrument used for the operation. These cobalt drill bits can open holes in any kind of metallic material such as stainless steel, titanium or other alloys. The drilling is initially started with the 4mm drill bit. After a few mm of drilling, the 4.0 mm drill bit is replaced with the 6.0 mm drill bit to enlarge the initial hole. This is repeatedly executed until the hole is completed. Metallic debris is meticulously collected in gauze placed around the neck, which during the drilling process is frequently replaced to avoid the spreading of any excess in the surrounding tissues. In Figure 6 the two cobalt drill bits used are depicted. 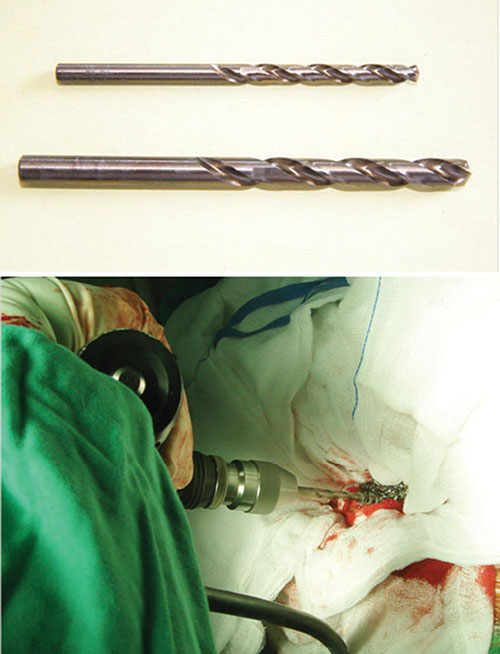 Figure 6: The two cobalt drill bits 6.0 mm and 4.0 mm respectively, used for the creation of the hole on the femoral steam just below the broken neck. The drill bits were adjusted
to the standard electric drill used for the operation. The metallic debris were meticulously collected in many gauzes placed around the neck, which during the drilling process was frequently replaced to avoid the spreading of the excess generated debris in the surrounding tissues.

The above procedure can take place, regardless the revised THA is a cemented or cementless one. Nevertheless, the gradual and manually controlled nature of fixation disruption ensures minimal or even negligible destruction of the biological bone vicinity, allowing for safe placement of the revision femoral stem.

Currently, the number of femoral revision arthroplasties continues to rise in the ageing population6. Removal of the femoral stem can be a challenging procedure for the orthopaedic surgeon. Performing a femoral osteotomy or not, is still controversial. Many authors7-10 suggest the extended trochanteric osteotomy and some others raise concerns with this technique11,12 or even give advice to avoid any femoral osteotomy13.

A number of techniques and extensile exposures have been described and include namely: The standard trochanteric osteotomywhich provides excellent exposure of the acetabulum and femoral diaphysis but this technique has a rate of nonunion in revision cases ranging 15% to 20%14. The extended trochanteric osteotomy is another technique in which the osteotomy starts eight to 20 cm below the tip of the greater trochanter and ranges in length from 12.5 cm to 14 cm9,15. Yet the femoral stem, for the revision THA, must extend further along the distal part of the femur, thus, a longer stem must be used since the tip of the stem must be at least 6 cm distal to the lower end of the lateral cut which results in considerable additional compromise of the femoral bone. Additional reported complications of the former techniques are the increased incidence of non-union, fracture of the osteotomy fragment and subsidence of the stem7,10,16. The transfemoral approach1,2 although it is currently attractive, intraoperative or postoperative fractures of the femur have been reported in 15% of cases17; and the trochanteric slide osteotomy, a technique with low rate of femoral complications and high union rates with a versatility of opening distal femoral window to remove a well-fixed cement plug14. However, it is still unclear if a selected femoral osteotomy is preferable to remove a femoral stem or to take the risk of an intraoperative fracture18. On the other hand, preserving as much bone stock as possible and avoiding any femoral fracture or crack is crucial in femoral revision procedure7.

There are some limitations using this novel tool. Even though one gets the impression, while observing the joint intraoperatively, that the metallic debris has been removed completely, this cannot be verified macroscopically. Therefore, the drilling into the stem may be considered as a limitation, because, in the long term follow-up, the inadequately removed debris from the drilling into the stem, could potentially create an additional problem to the typical wear in a revision hip arthroplasty (eg. initiation of an inflammatory process and polyethylene wear leading to loosening of the revision prosthesis). It is also noted that the drill may also be “worn out” too and produce particles that stay in the joint, and lead to adverse biological reactions.

However, these potential limitations will be dramatically minimised after a generous wash-out with numerous litters of saline before the closure of the wound, which was also done in the reported case.

However if the surgeon faces a similar challenging problem must offer the optimal solution, taking of course into account the potential future hazards using the proposed technique, which for similar to the previously reported case are not yet documented, as the experience on such cases is almost unexisting and undocumented too. The patient must be mobilised again as soon as possible. Osteotomizing the femur using the Wagner technique will confine the patient bedridden longer time with all the potential risks of prolonged immobilization (pulmonary embolism, urinary or respiratory infections, and potentially pressure ulcers).

The current follow-up of the previously reported patient is seven years. During a telephone communication with him, the patient reported that is doing very well, and he was not eager to have a new radiograph to check this operation. Therefore by inference his revision hip arthroplasty is sound till now.

The above presented metallic sterilizable novel surgical tool is designed to provide an option for the removal of arthroplastic hip joints having broken neck. Using this tool, the surgical technique does not compromise the bone stock around the femoral stem and facilitates the removal procedure. However in the unfortunate case where it may not be possible to remove a well fixed femoral stem with the reported technique then the surgeon must be prepared to perform a type of osteotomy.

In conclusion, the proposed instrument offers the surgeons, facing fractured femoral stems with a broken neck during revision THA, a promising alternative for its removal, while fully preserving local periosteal anatomy and vascularity.

The authors declare no conflict of interest to disclose.