Background: Auxiliary partial orthotopic liver transplantation is an alternative technique for the treatment of patients with fulminant hepatic failure and metabolic liver disease. It provides temporary support of liver function until sufficient regeneration of the native liver. Pediatric patients have a long life expectancy and are best candidates to benefit from the interruption of antirejection treatment.
Description of case: A 4-year-old boy underwent auxiliary partial orthotopic liver transplantation for fulminant hepatic failure using a cadaveric left lateral segment of liver. One year after auxiliary partial orthotopic liver transplantation, the patient’s native liver was determined to be completely normal and he was doing well. The patient was then gradually weaned from the immunosuppression over the course of one year. The graft was undetectable on follow-up computerized tomography performed before complete cessation of immunosuppression, leading to the diagnosis of “vanishing graft syndrome”.
Conclusion: Graft atrophy commonly occurs after auxiliary partial orthotopic liver transplantation due to cessation of antirejection therapy. But to our knowledge, complete graft disappearance is a rare occurrence reported in the English literature. Timing for withdrawal of the immunosuppression is an important decision to be made in this technique.Hippokratia 2015; 19 (3): 274-277.

A well-known and expected issue of APOLT is the graft atrophy which typically develops after cessation of immunosuppression due to rejection after APOLT and affects the outcome. Thus, withdrawal time of the antirejection treatment is a critical decision to be made after sufficient regeneration of the native liver in APOLT3,4.

Another reason of graft atrophy is the progressive alteration of hepatic hemodynamics after APOLT, especially in portal venous blood flow to both the graft and the native liver. Kasahara et al developed a new surgical approach called portal vein diversion to address this problem5.

We presented a case with complete graft atrophy as a very rare condition two years after APOLT.

A 4-year-old boy had rapidly progressing fulminant hepatic failure (FHF) with hepatocellular as well as the obstructive component of unknown etiology. He was mildly encephalopathic. Additionally, his prothrombin time was extremely elevated, and ammonia level was high. His bilirubin increased up to 19 mg/dl. Due to his clinical condition and laboratory results, no liver biopsy was required before transplantation, so he underwent APOLT using a cadaveric left lateral segment of liver following left hepatectomy consisting of segments 1-4. The anastomoses performed were between recipient left hepatic vein and donor left hepatic vein, donor left portal vein and recipient left portal vein, and finally infrarenal aortic graft and the recipient common hepatic artery at the level between the splenic and gastroduodenal artery, respectively.

Perioperatively, we performed a frozen section liver biopsy which showed massive cellular infiltrates throughout the liver. However, the necrosis was estimated to be about 20 to 30% of the entire liver with chronic triaditis and bile duct proliferation. Evidence of viable tissue in the liver was identified. Histopathology of the resected native liver (left lobe) showed submassive hepatic necrosis, bile ductular proliferation and chronic triaditis.

Patient did well after the transplant. At the beginning Tacrolimus (Prograf®, Astellas Pharma Canada, Inc., ON, Canada) was used for immunosuppression at a dose of 1 mg twice daily orally until therapeutic levels were reached. Also, he received methylprednisolone (Solu-Medrol®, Novopharm, ON, Canada) at a dose of 8 mg every 24 hours orally. Four months after transplantation he had an acute mild rejection. Over the course of the next two years, the patient’s native liver function began to stabilize as evidenced by repeated liver biopsies. Approximately one year after APOLT, biopsy of the native liver revealed mild portal triaditis, mild portal fibrosis with septal extension, and mild central vein fibrosis. Tissue sections of native liver 13 months and 18 months after transplantation demonstrated resolution of hepatic necrosis and persistence of mild chronic portal and periportal inflammation (Figure 1, Figure 2). 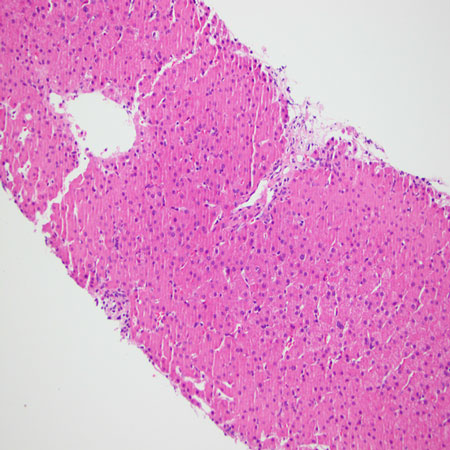 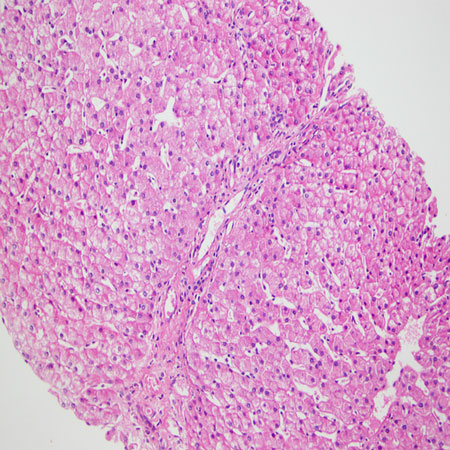 Computed tomography (CT) images obtained through the liver one year after the split left lobe transplant showed a normal appearing graft and also, the native right lobe demonstrated normal attenuation and enhancement (Figure 3). The immunosuppressive medications were gradually tapered down according to our established protocol one year after APOLT and were stopped after two years. At this time, the CT demonstrated significant atrophy of the left lobe graft due to chronic rejection. The previously visualized left lobe liver transplant had been replaced by non-enhancing soft tissue measuring approximately 4.7 x 2 cm in transverse and anteroposterior diameter (Figure 4). 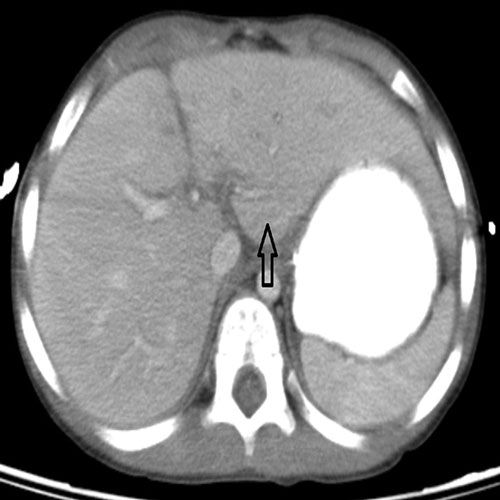 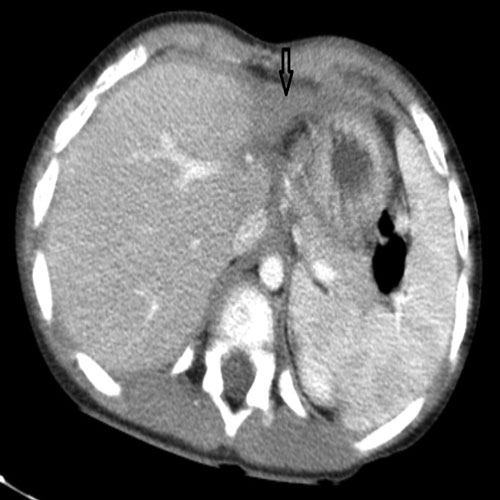 Figure 4: The computed tomography image obtained two years after transplantation and 12 months after the tapering of immunosuppression shows significant atrophy of the left lobe graft. In the place of the previously visualized left lobe liver transplant, there is a triangular soft tissue density measuring approximately 4.7 x 2 cm in transverse and anteroposterior dimension, representing graft atrophy (arrow).

Hepatobiliary scintigraphy demonstrated excellent function of the native liver and virtually no function of the transplanted liver. Six years after APOLT the patient’s native liver was completely normal as evidenced by histopathological and laboratory results and he was doing well. However, the graft was undetectable on the CT, consistent with “vanishing graft syndrome” (Figure 5, Figure 6). The patient is now living a normal life without treatment. 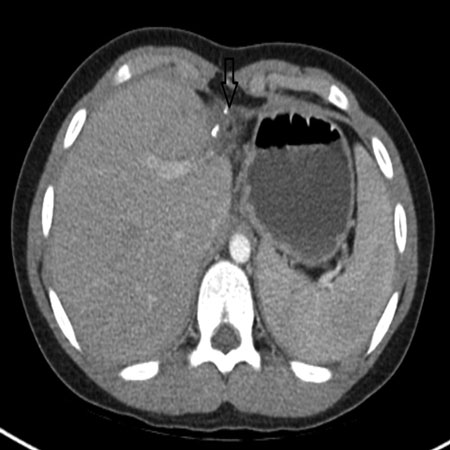 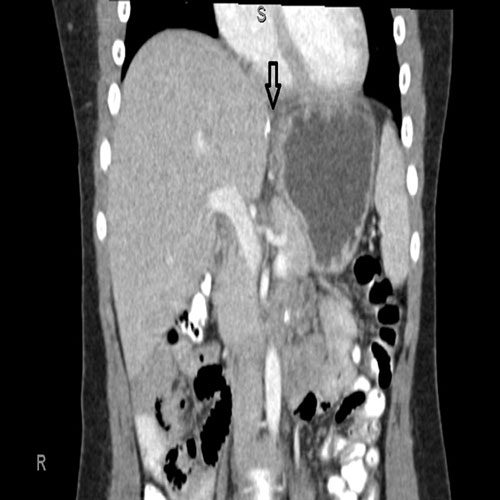 ALF is a rare but highly mortal disease in childhood. Approximately 10-15% percent of patients requiring emergency transplantation have a chance of survival without transplantation¹. APOLT is an accepted treatment option for specially selected children with acute liver failure (ALF). The first APOLT was performed in 1985 by Bismuth et al6 and Gubernatis et al 7 reported in 1991 the first successful APOLT for FHF.

APOLT also provides compensation for enzyme deficiencies and avoids total resection of the native liver in a patient with congenital metabolic liver disorders8. The other indication for APOLT is ABO-incompatible grafts that are required due to the limited number of potential living-donor candidates1,5.

The surgical technique of APOLT relies on retention of all or part of the native liver and an auxiliary graft in a heterotopic or orthotopic position. The native liver is supported by the auxiliary graft during regeneration2. Recovery of failed liver is one of the crucial issues. This surgical technique was presented as a treatment option for the patients with ALF requiring a liver transplant to ensure survival with the expectation of native liver regeneration. After regeneration of the native liver as demonstrated by liver biopsy, the immunosuppression is withdrawn1,2. Due to long-term complications of immunosuppressive therapy, pediatric patients are the best candidates to benefit from cessation of this treatment1.

One of the most important aspect affecting outcome after APOLT is graft atrophy. The etiology of this issue has never been elucidated clearly10,11. One of the main reasons is graft rejection. Early and late acute rejection episodes occur within the first 3 and 3-6 months after transplantation, respectively. Patient noncompliance and/or reduction of the baseline immunosuppressive agents are generally the reasons for this condition3,4. Severe late acute rejection occurs mostly due to three contributing factors: lowering the immunosuppression, native liver affecting allograft tolerance and inducing graft rejection, and functional competition affecting resolution of rejection. Despite intensive rejection therapy, initial graft volume cannot be maintained due to acute rejection4.

Our patient had a mild acute rejection four months after transplantation. He also had a late rejection two years after APOLT, one year from weaning immunosuppressive agents causing vanishing of the transplanted liver. The graft may have atrophied as a result of the withdrawal of immunosupression causing rejection.

In a series of 31 patients, Kasahara et al5 presented the so-called portal vein diversion in favor of the graft with interruption of the portal inflow to the native liver. The native liver regeneration is compromised evidently with the help of this technique. In order to prevent functional portal flow competition, they used portal vein diversion in 83% of their subjects.

In some cases, graft atrophy occurs after APOLT but to our knowledge, complete graft disappearance is rarely reported in the English literature, and we could find only two case reports10,12. Additionally, we found a similar case report of anauxiliary whole liver transplantation. A 59-year-old female who had ALF related to aminata phalloidesmushroom poisoning underwent a native liver right tri-sectionectomy and an entire cadaveric liver graft transplantation. The transplanted whole cadaveric liver was undetectable on a CT scan performed 6 months after immunosuppression stopped and 2 years after transplantation13.

Timing of withdrawal of the antirejection treatment is a critical decision to be made in APOLT. Although graft atrophy is expected after cessation of immunosuppression due to rejection after APOLT, complete graft atrophy is rare.

The authors have no conflict of interest to declare.