Skip to content
hippokratia.gr > Volume 19 (2015) - Issue 3 > A case of peduncular hallucinosis due to a pontine infarction: a rare complication of coronary angiography

Background: Cerebral thromboembolism is a rare, but well-recognized complication of angiographic procedures. Peduncular hallucinosis (PH) is a form of complex visual hallucinations usually associated with lesions in the midbrain and thalamus.
Case presentation: We report the case of a 79-years-old male patient with internuclear ophthalmoplegia and vivid lilliputian visual hallucinations (peduncular hallucinations), caused by a pontine infarction following coronary artery catheterization. The patient was started on quetiapine treatment with good results and tolerance. In the next three months, the medication has been discontinued, and the patient is without symptomatology thereafter.
Conclusion: An understanding of how different pathologies may produce complex visual hallucinations can lead to an appropriate treatment, depending on the site and the nature of the lesion. Furthermore, cerebral embolism due to any angiographic procedure, although rare, should always be taken into consideration, upon any neurological manifestation, visual hallucinations included. Hippokratia 2015; 19 (3): 268-269.

Peduncular hallucinosis (PH) is a form of complex visual hallucinations associated with organic brain disease. Peduncular hallucinations include vivid, formed, well-organized and non-stereotyped images of people or animals and have been reported in thalamic, midbrain, pontine and basal diencephalic lesions, as well as in lesions of the pars reticulata of substantia nigra1. PH is a diagnosis of exclusion and needs to be differentiated from other pathological conditions that may be associated with complex visual hallucinations, including delirium tremens, drug-induced hallucinations, migraine, treated Parkinson’s disease, Lewy body disease, focal epilepsy and Charles Bonnet syndrome2.

A 79-years-old male with a medical history of coronary artery disease, quadruple coronary artery bypass graft surgery six years before and aortic valve stenosis, presented with dyspnea on exertion and underwent a coronary artery catheterization, via the femoral artery, with normal findings. Immediately after catheterization, the patient developed diplopia. Neurological examination revealed right inferior internuclear ophthalmoplegia, with both abducens nucleus and paramedian pontine reticular formation impairment. Ophthalmoplegia resolved in 48 hours. Four days later, the patient developed vivid visual hallucinations, including lilliputian grotesque people and animals, as well as images of extreme beauty (forests, rivers and his deceased wife wearing fabulous dresses). The patient was not delusional or confused and preserved insight. Hallucinations occurred during the day, with the patient in an alert state. Sleep was impaired. Brain computed tomography imaging (Figure 1) demonstrated a low density lesion in the right pons, while brain magnetic resonance imaging (MRI) demonstrated the lesion in the same area (Figure 2). These findings were consistent with a subacute ischemic pontine infarction, following the coronary angiography. Laboratory examinations, brain magnetic resonance angiography exam, electroencephalography, carotid artery triplex and transcranial Doppler were normal. Mini–mental state examination score was 28/30 and trail making test was normal. The diagnosis of PH was reached and the patient was started on quetiapine with good results and tolerance. In the next three months, the medication has been discontinued, and the patient is without symptomatology thereafter. 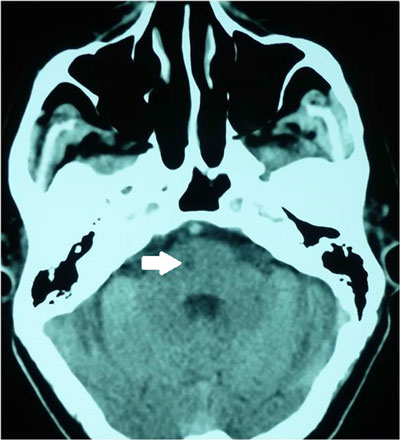 LHermitte was the first to describe PH in 19223, but it was Van Bogaert in 1927 who coined the term, by means of post-mortem neuropathological examination4. Visual hallucinations include vivid, colorful, non-stereotyped images of people or animals, in lilliputian form. Images are often bizarre, with decapitated human torsos or monstrous animals, non-threatening to the patient. Hallucinations occur during the day, with the patient preserving insight2. Sleep disturbances are common, due to dysregulation of rapid eye movement (REM) sleep mechanisms5.

Visual information in the retinogeniculocalcarine tract is modulated by ascending input from pedunculo-pontine and parabrachial nuclei and dorsal raphe nuclei via the superior colliculus2. Lesions(vascular, infectious, tumors, degenerative) described in PH are located in the midbrain area, mainly in substantia nigra, pons and thalamus, affecting the ascending reticular activating system of the brainstem and its projections to the dorsal lateral geniculate nucleus and also to the lateral pulvinar of thalamus6,7. Midbrain and pons lesions involving the dorsal raphe nucleus result in loss of ascending serotonergic inhibition to the dorsal lateral geniculate nucleus. Consequently, a hyper-excited geniculate can generate visual hallucinations at the cortical level2,6. In addition, lesions involving thalamic nuclei may disrupt the important processing function of these structures, resulting in impaired retinal signals and visual hallucinations6.