hippokratia.gr > Volume 20 (2016) - Issue 1 > A case of fatal sepsis due to multidrug-resistant Corynebacterium striatum

Background: Although non-diphtheria corynebacteria have traditionally been regarded as avirulent members of human bacterial flora, their pathogenic potential is increasingly recognized in our time. Reasons for this include the prolonged survival of severely ill and immunocompromised patients, the development of more invasive diagnostic and therapeutic procedures and the sub-optimal use of antibiotics that disrupts normal microbial balance and favors superinfections. Case Report: We present a rare case of sepsis due to multidrug-resistant Corynebacterium striatum in a 76-year-old host. The patient suffered from myelodysplastic syndrome and was on corticosteroid treatment due to atopic dermatitis. He had, also, a recent hospital admission and received a course of broad-spectrum antibiotics due to lower respiratory infection. The patient responded neither to empiric nor to targeted treatment and finally succumbed. Conclusion: Diphtheroids are emerging pathogens capable of causing severe opportunistic infections. Their multidrugresistant nature renders treatment problematic and poses a threat to the currently established antimicrobial stewardship programs. Hippokratia 2016, 20(1): 67-69

Non-diphtheria corynebacteria are Gram-positive, pleomorphic rods that have traditionally been considered as innocuous inhabitants of human epithelial and mucosal surfaces. Accumulating reports of cases presenting with severe infection do, however, emphasize the need to reconsider their role as potential pathogens in the context of modern medicine. In this report, we present a case of sepsis due to multidrug-resistant Corynebacterium striatum which responded neither to empiric nor to targeted treatment and finally succumbed.

A 76-year-old male patient presented to the Emergency Department complaining of fever and cough. His symptoms had begun three days before presentation. He had a history of smoking habit (80 packyears), myelodysplastic syndrome (MDS) as well as of atopic dermatitis for which he was on treatment with corticosteroids (methylprednisolone, 16 mg orally, once daily). Furthermore, he had a recent hospital admission due to severe lower respiratory infection and received a seven-day meropenem course. The patient’s main clinical findings on presentation were as follows: fever (40°C), sinus tachycardia (100 beats per minute), hypotension (systolic blood pressure 100 mmHg, diastolic blood pressure 60 mmHg) and tachypnea (28 breaths per minute). Lung auscultation revealed bilateral diffuse crackles. Laboratory evaluation showed the presence of hypoxemia (PO2 55 mmHg), anemia (hemoglobin 9 g/dl) and elevated inflammation markers (white blood cells: 19 x 103/μL with 90% neutrophils, C-reactive protein: 25 mg/dl, erythrocyte sedimentation rate 85 mm/h]. Arterial blood gas analysis was indicative of acute respiratory alkalosis (pH 7.5, CO2 28 mmHg, HCO3– 25 mEq/L) which made us suspect the development of acute respiratory distress syndrome. At that point, blood lactate levels were still measured within the normal range; still at the upper limits (2 mmol/L). His chest X-ray demonstrated bilateral diffuse opacities. Further evaluation with chest Computed Tomography showed areas of ground-glass morphology. In view of these findings, the patient was admitted. Blood and urine cultures were collected and sent for microbiological investigation. Initiation of empiric antimicrobial treatment with a combination of ceftriaxone, moxifloxacin, and linezolid as well as supportive care with intravenous fluids and oxygen followed. Having to manage a patient with severe sepsis, we preferred to withdraw methylprednisolone gradually due to the increased risk for adrenal insufficiency. A transthoracic echocardiogram was performed but did not reveal any vegetations.

The patient’s first blood culture turned positive on day two, revealing coryneform Gram-positive rods on Gram-stain (Figure 1). However, our initial suspicion entailed contamination of the sample with skin commensals. On day three, a second blood culture turned positive, showing morphologically identical diphtheroids. Both cultures grew non-hemolytic, catalase-positive, oxidase-negative colonies on 5% sheep blood and chocolate agar. The pathogen was identified as Corynebacterium striatum (excellent identification) with Vitek 2 automated system (bioMérieux Inc., Durham, USA). Susceptibility testing of the strains was conducted in accordance with the criteria set by the European Committee on Antimicrobial Susceptibility Testing (EUCAST) for Corynebacterium spp. The pathogen was tested resistant to penicillin G, ciprofloxacin, moxifloxacin, gentamicin and clindamycin by both disk diffusion and E-test methods. Initial testing by disk diffusion gave ambiguous susceptibility results for vancomycin, showing an inhibition zone of 16-17 mm. Nonetheless, further testing by the E-test methodology gave a Minimum Inhibitory Concentration (MIC) of 1 μg/ml for both vancomycin and linezolid that corresponds to the susceptibility range of values. In the meantime, while the microbiological results were pending, the patient’s clinical status and laboratory values were gradually deteriorating (Table 1). On day four, he was transferred to the intensive care unit (ICU) and was intubated due to respiratory failure. Treatment was switched to vancomycin, but he developed septic shock (central venous pressure was equal to 3 cm H2O upon admission to the ICU) and died soon after his transfer to the unit (Figure 2). Two additional blood cultures turned positive for Corynebacterium striatum since the patient had succumbed. It is worth emphasizing that all of the aforementioned positive cultures were collected at different time points from different sites. No other pathogen was isolated from the particular patient during his hospitalization. 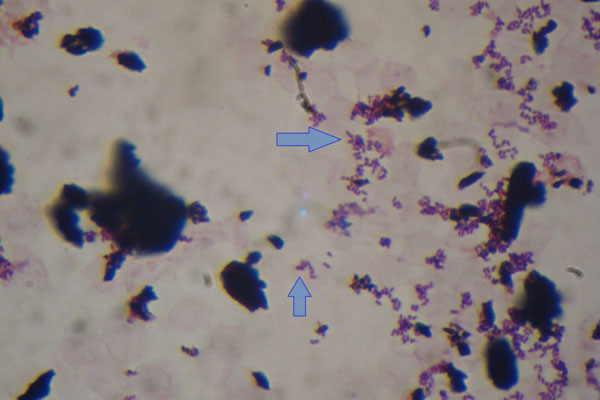 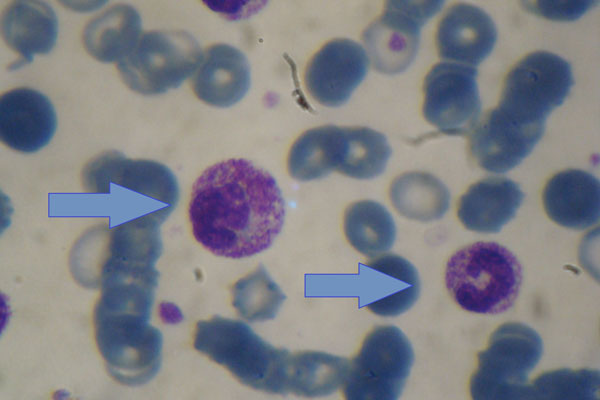 Figure 2. Thin blood film stained with May Grünwald-Giemsa technique and examined with 100x oil immersion objective. Toxic granulation and left shift of the polymorphs (arrows) are prominent as the patient develops sepsis due to C. striatum.

Although non-diphtheria corynebacteria have traditionally been regarded as avirulent colonizers of skin and mucosal surfaces, there are accumulating reports about their pathogenic potential. Corynebacterium striatum has been linked to infections such as endocarditis, bacteremia, septic arthritis, peritonitis, meningitis, pulmonary infections and exacerbations of chronic obstructive pulmonary disease. Nevertheless, there are few reports of fatal sepsis due to the particular species, while no other reports are currently available for Greece. Putative predisposing factors for infection include the presence of severe underlying co-morbidities, the use of prosthetic devices1, prolonged hospitalization of the patient2 and the administration of multiple antibiotic courses3,4. Older age and male gender seem to increase relative risk for infection5. Association with the latter has been attributed to heavier skin colonization due to the abundance of fatty acids on male epidermis6.

In our case, the patient was susceptible due to a chronic, underlying hematological disorder (MDS) as well as due to the corticosteroid treatment he was administered. Previous treatment with a broad-spectrum antibiotic regimen (meropenem) may, also, have contributed to the onset of an opportunistic infection. This assumption is supported by the strain’s in vitro resistance to the particular agent. Causality of sepsis and not merely specimen contamination is underscored by the fact that the bacterium was isolated from four consecutive blood cultures, while no other pathogen was retrieved from any of the patient’s clinical specimens. It is, however, unclear whether the same pathogen was the causal agent of pneumonia or whether sepsis occurred on the ground of a concurrent pulmonary infection due to another pathogen. The first case scenario is, indeed, supported by several epidemiological studies, which highlight the species’ tropism for pulmonary tissue5-8. Finally, another noteworthy feature is the failure of both linezolid and vancomycin to control the infection that rapidly progressed to septic shock.

Conclusively, although non-diphtheria corynebacteria are considered microorganisms of low virulence, they should not be dismissed as contaminants of clinical specimens before each patient’s medical history and clinical condition are considered. Cooperation between the laboratory and the clinicians is essential for the establishment of correct diagnosis so as to optimize antimicrobial treatment and subsequent patient outcome. C. striatum is often resistant to the most commonly used antibiotics such as beta-lactams and quinolones9,10 but no strain has been tested resistant to vancomycin and linezolid so far. Thus, optimal antimicrobial treatment should contain either of the two regimens. Furthermore, there are studies in the literature presenting molecular evidence of person-to-person transmission5,11 as well as colonization of the environment in the vicinity of the affected hosts12. The latter study has, also, demonstrated transient colonization of the hands of staff caring for the affected patients. In addition, outbreaks involving several cases in high-risk units have been described in the literature12-15. Nonetheless, modes of transmission have, yet, to be elucidated in detail. This hampers the development of effective control policies against potential spread or establishment of such resistant strains in nosocomial environments. Failure of control measures could pose a threat to individual susceptible hosts and to antimicrobial stewardship programs as a whole. Vancomycin is held as a reserve antibiotic against methicillin-resistant Staphylococcus aureus and Enterococcus spp infections16,17. Subsequently, its overuse against multidrug-resistant corynebacteria would, also, exert selective evolutionary pressure in favor of vancomycin-resistant Gram-positive cocci. Fortunately, no secondary case has been identified in our hospital in the months following the hospitalization of the deceased patient.

Authors declare no conflict of interest regarding this manuscript.