Α 34-year-old G1P0 patient presented to the University of Michigan health system with extensive left vulvar varicosities in pregnancy (Figure 1). A vulvar ultrasound at 36 weeks of gestation demonstrated a large-sized mass with adjacent dilated vessels in the left labium majus. The patient stated that the varicosities were increasingly painful. To avoid any unpredictable tearing and lacerations during vaginal birth and possibly life-threatening bleeding from this site, the patient consented to a cesarean section which was performed at 39+4 weeks of gestation. Following delivery, the pain was alleviated, but the vulvar varicosities did not regress. The patient was subsequently referred to the vascular surgeons who recommended a pelvic venogram with possible embolization of any incompetent vessels. However, the patient declined further treatment and was discharged from hospital care and follow-up. 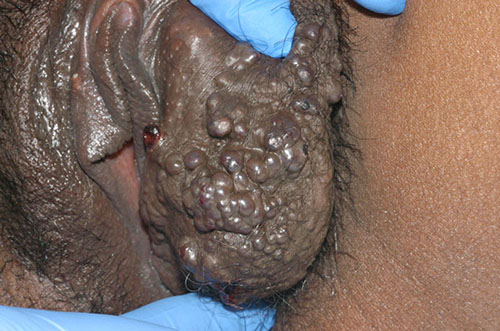 Vulvar varicose veins occur in approximately 4% of women and are rarely seen outside pregnancy1. The pathogenesis of vulvar varicosities is mainly valvular dysfunction, but the fundamental etiology is unclear2. Risk factors associated with vulvar varicose veins include increasing age, standing for long periods, genetics, and increased levels of estrogens and progesterone3.

To date, there is no consensus on the optimal mode of delivery. There is no clear evidence that favors cesarean section delivery over vaginal birth in the rare case of severe vulvar varicosities2. The main concern is that the vulvar varicose veins may cause extensive bleeding should they rupture during labor and vaginal delivery. In our case, the patient was informed about the risks of possible rupture and bleeding from the extensive vulvar varicosities and also about the risks of an operative delivery, and gave informed consent for cesarean section.

Cases of successful vaginal birth have been described in the presence of huge vulvar varicose veins. However, cases of massive bleeding from ruptured vulvar varicosities following normal delivery have also been reported2. Since no evidence base exists regarding the safest delivery method, each patient should be considered on an individual basis, and informed consent should be obtained.