Background: Kidney transplantation is the definite surgical treatment for end-stage renal disease. Shortage of organs and the increasing number of patients with end-stage renal disease has led to an expansion of the selection criteria promoting the use of organs from marginal donors. Use of kidneys with renal artery aneurysm (RAA) is one such example. Description of the case: We report a case of living-related kidney transplantation from a 46-year-old female donor with unilateral RAA to her 68-year-old father. The pre-operative donor’s assessment with a computed tomography angiogram revealed a saccular aneurysm of the left renal artery. The transplant team proceeded to the left nephrectomy, surgical ex vivo repair of the aneurysm and transplantation of this kidney to the recipient, with the total ischemic time of 130 minutes. At revascularization, there was no anastomotic leak with good perfusion of the organ and normal postoperative kidney function. Conclusion: RAA is a rare renal anatomical abnormality with unproven clinical significance. Advanced microvascular surgical techniques can be used to repair the aneurysm with subsequent successful use for transplantation. Hippokratia 2016, 20(1): 90-92

Renal artery aneurysm (RAA) is an uncommon and usually asymptomatic renovascular abnormality. Its incidence varies from 0.09 % up to 1 % and almost always is an incidental finding through imaging investigation tests for other reasons1-3. Treatment in most of the cases can be successful using surgical or endovascular repair methods even though up to 20 % of these cases will eventually need a nephrectomy, ex-vivo aneurysm repair/reconstruction and subsequent autotransplantation4. We report a case where the kidney with the RAA was used as a graft for a living related allotransplantation.

A 68-year-old man with end-stage kidney disease secondary to focal segmental glomerulosclerosis on hemodialysis for six months, was admitted for an elective living-related kidney transplantation. The donor was his 45-years-old daughter. Pre-transplant histocompatibility testing showed 1, 1, 1 mismatch on the A, B and DR loci, respectively. The preoperative renal function of the donor was normal. The donor’s pre-assessment with an abdominal computed tomography (CT) angiogram demonstrated a saccular non-thrombosed aneurysm of the left renal artery (Figure 1). The right renal vessels were unremarkable. The transplant team decided to use the left kidney as a graft with a plan to carry out an aneurysm reconstruction. 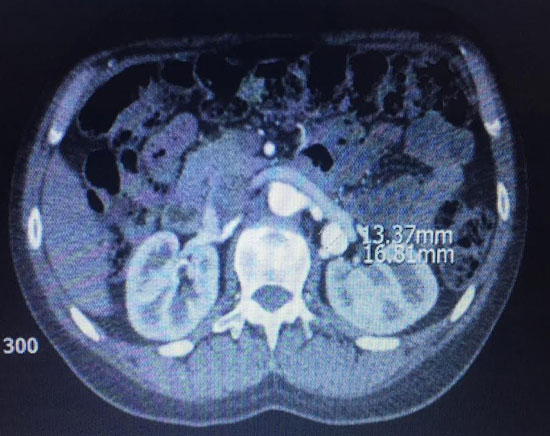 Figure 1: Computed tomography angiogram of the abdomen demonstrating the left renal artery aneurysm, at the bifurcation of the renal artery, with dimensions approximately 13 x 17 mm.

After laparoscopic removal of the kidney, ex-vivo reconstruction was performed before transplantation. The renal artery was irrigated to distend the aneurysm (Figure 2), from which two distinct arterial branches were identified. The saccular aneurysm was excised, and the defect was repaired with a running 6-0 polypropylene suture (Figure 3). The reconstructed renal artery was anastomosed end-to-side to the recipient’s external iliac artery. At revascularization, there was no anastomotic leak with good perfusion of the organ. The operation lasted 245 minutes with a total ischemic time of 130 minutes. 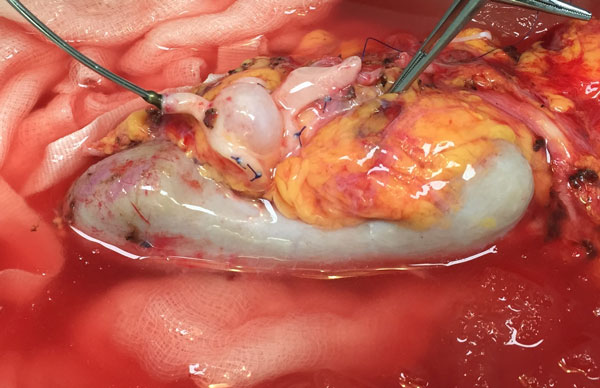 Figure 2: Irrigation of the aneurysm sac located at the bifurcation of the renal artery to posterior and anterior renal branch.

On the first postoperative day the protocol kidney ultrasound exam was unremarkable with good flow throughout, normal resistant index and normal appearances of the renal artery and the anastomosis. The donor was discharged two days after the laparoscopic nephrectomy and the recipient after an uneventful recovery was discharged on the 8th postoperative day.

Figure 3: Excision of the saccular aneurysm sac ex-vivo before the transplantation (A) and repair of the defect after excision of the aneurysm with a running 6-0 polypropylene suture (B).

Five months after the transplantation the function of the renal graft is satisfactory with a serum creatinine of 121 μmol/L and donor’s postoperative creatinine level is 82 μmol/L.

Excluding the cases with multiple vessels, anomalies of the renal vasculature can be identified up to 6 % of the live donor pre-assessment investigations1,5. RAA is one of the most uncommon anatomical abnormalities with a prevalence of less than 1% in the general population1,2,4,6,7. The majority of RAAs are classified as saccular and less frequently can be fusiform, dissecting or intra-renal1,7.

RAA is usually an incidental finding because it is either asymptomatic or has no specific clinical presentation and causes no subsequent problems3,4,7 unless it is complicated by rupture, thrombosis or causes embolic episode especially in pre-menopausal women. These can present as acute medical conditions causing morbidity or mortality6,7. Although currently there are no strong associations identified, the renal aneurysm has been correlated with systematic hypertension; however, it is unclear whether hypertension is the causative factor or just the result of it7.

The difficulty of identifying causative and prognostic factors for RAAs is the main reason why there are no specific guideline recommendations regarding the management of this rare entity. Henke et al3 support that all patients with uncontrolled hypertension and RAAs more than 1 cm should undergo surgical repair. Surgical repair is also necessary for all aneurysms greater than 2 cm, regardless of the patient’s blood pressure. For aneurysms between 1 and 2 cm, they suggest close follow-up. Non-calcified saccular aneurysms in hypertensive patients have increased risk for rupture7. Literature agrees that the decision for a surgical repair of renal aneurysms should be based on the age, gender, anatomic characteristics of the aneurysm and its size2,3,7. Autotransplantation of the kidney after ex-vivo surgical repair of the aneurysm in cases that the repair is not feasible using endovascular methods is a well-established treatment option2,3,7. Also, re-implantation of the organ after ex-vivo surgical repair of the aneurysm has been successfully used in cases of an aneurysm in already transplanted kidneys8,9. In the reported case the aneurysm was a non-calcified saccular aneurysm with a maximum diameter of 1.7 cm, located at the bifurcation of the left renal artery and discovered incidentally in a young hypertensive female donor. Based on the literature recommendations, we believe that use of this kidney as a graft after ex-vivo repair of the aneurysm was justified.

The fact that the number of the patients with end-stage renal disease is increasing and the number of donor organs is limited, expansion of the donor selection criteria in order to increase the number of organs available for transplantation is inevitable, both for cadaveric and living donor allograft transplantation1,5,10. Isolated case reports and small case series1,4,6 showed that the selected use of organs with renovascular pathology is a safe solution for the recipient and at the same time gives definite treatment to the donor. There is, however, the need for close post-operative follow-up for the donor (in addition to the recipient) because of a reported increased risk of aneurysm incidence in the remaining kidney1.

After careful selection and in experienced surgical transplant centers, renal artery aneurysm should not be considered an exclusion criterion for transplant. This does not possess any additional risks for the recipient. We, however, advocate close postoperative follow-up for both the donor and the recipient.

The authors declare that there is not conflict of interest regarding the publication of this paper.

This case was presented as an e-poster at the 12th Congress of the Surgical Society of North Greece, Kavala.